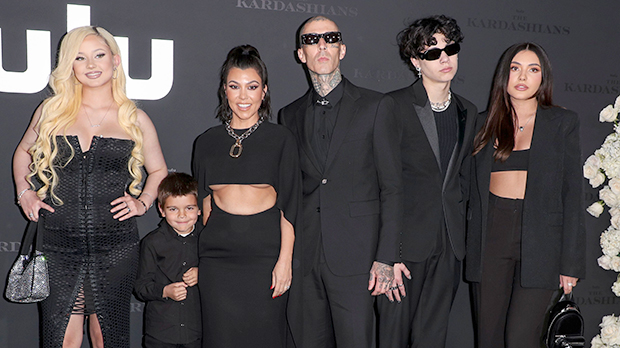 All three of Travis Barker ‘s children went to Disneyland on April 18 to celebrate his fiancée Kourtney Kardashian‘s 43rd birthday. The Poosh founder posted photos to Instagram of her and Travis, 40, with Landon Barker18, Alabama Barker16, and Atiana De La Hoya23, as well as Kourtney’s 7-year-old son, Reign Disick. The blended family posed at the California park with Kourtney at the center of the group. The majority of them, including the birthday girl, rocked Mickey Mouse ears on their heads.

Kourtney shared more footage from their time at the Happiest Place on Earth, including one snapshot of Reign drinking juice and holding a stuffed animal. Kourt also captured glimpses of her Mickey Mouse-themed birthday cake and of the beloved park at nighttime. In the second-to-last photo in the post, The Kardashians star and the Blink-182 drummer wrapped their arms around each other in front of Cinderella’s Castle.

“Grateful for all of the blessings God has given me on my 43rd year of life 🥰😊❤️‍🔥 heart full,” Kourt wrote in her caption. Her future hubby commented on the post, “So blessed you were born, Happy Birthday.” Landon and Alabama, whom Travis shares with his ex Shanna Moakler, also shared love to their soon-to-be stepmom in the comments section.

Kourtney’s son Mason12, and Penelope, 9, did not make it to Disneyland. It’s possible they were at home with their dad Scott Disick or Kourtney’s other family members. Still, it was so sweet to see Kourt spend quality time with Travis’ children, whom she’s been close to ever since her fairytale romance with Travis began.

“Kravis” got engaged in October, and then had an impromptu Las Vegas wedding ceremony on April 4. Fans thought they became husband and wife that night, but Kourtney later clarified that the couple did not have a marriage license with them, so they ‘re still not legally married.