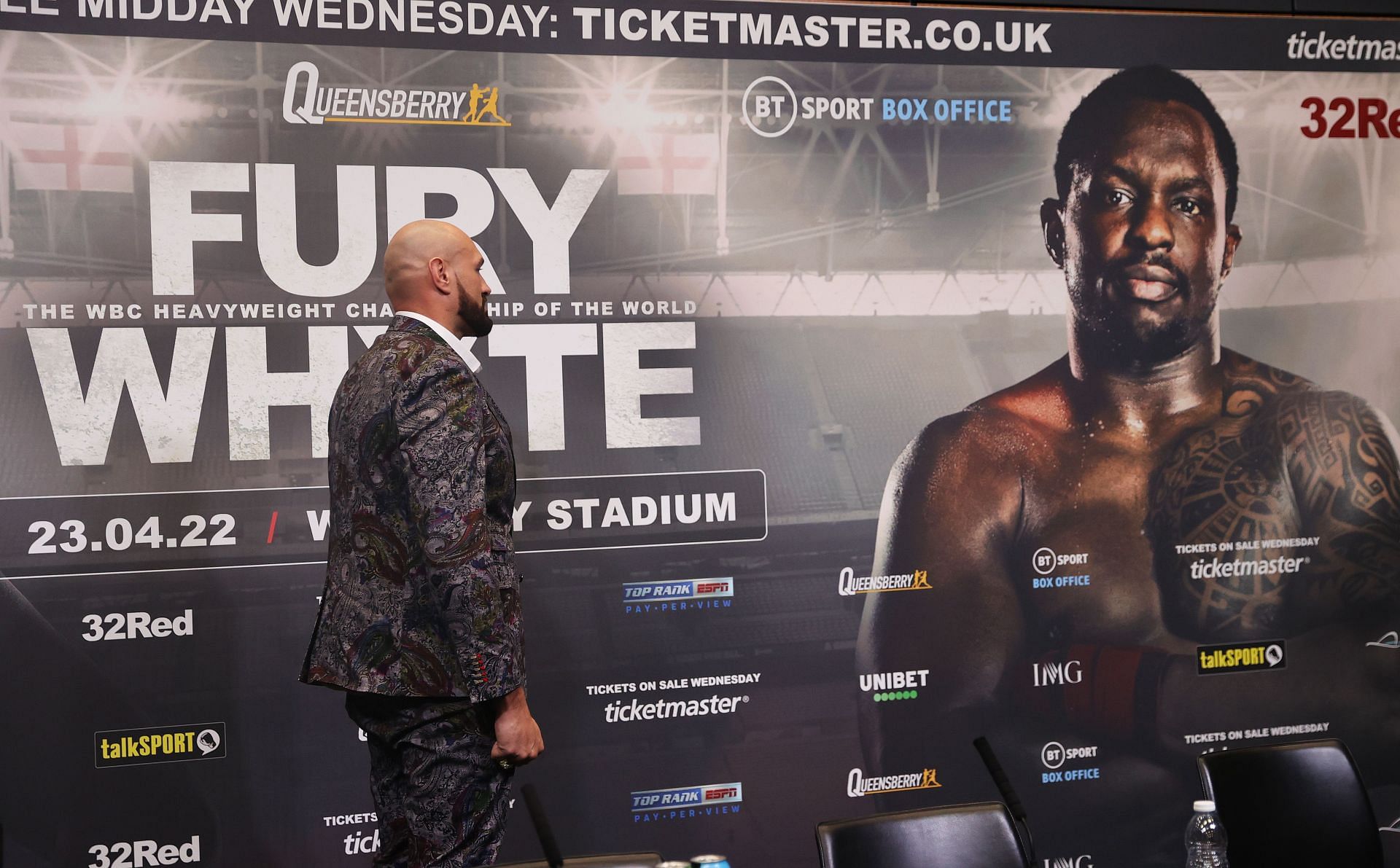 Tyson Fury was forced to do a staredown with Dillian Whyte’s poster after ‘The Body Snatcher’ no-showed their press conference on Tuesday.

‘The Gyspy King’ and his challenger are set to square off in April at Wembley Stadium. This week marked the first press conference for the fight, but Dillian Whyte decided not to show up.

The move is just one in a long series of questionable moves by ‘The Body Snatcher’. After purse bids confirmed that the two were going to square off, he refused to comment about the bout or sign his contract. He did not make the fight official until hours before the deadline.

The fight is now set to go down. However, that does not mean Whyte is going to show up to media events, as he chose not to attend the press conference. As a result, Fury was forced to have a ceremonial staredown with a poster.

Watch Tyson Fury have a staredown with Dillian Whyte’s poster below:

Tyson Fury does a face-off with a poster of Dillian Whyte after the challenger no-showed at their press conference…[📽️ @BTSportBoxing] https://t.co/HawvdeznXR

Ahead of his bout with Dillian Whyte, Tyson Fury has stated that the fight will be his last.

‘The Gyspy King’ is only 33 years old and in the prime of his career. His last victory over Deontay Wilder in October 2021 was viewed as the greatest fight of the year. Despite his recent success, he seems ready to hang it up.

Fury spoke about retirement at the press conference for his bout against ‘The Body Snatcher’. The WBC Heavyweight Champion explained that he’s got a lot of money in the bank and that he’s just ready to stop competing. Fury said:

“This is the final fight of my career, I’m retiring after this. $ 150 million in the bank, healthy, young, I’m gonna buy a massive yacht abroad. I’m retiring, I’m out, this is my final fight. I’m done. “

🗣️ “This is my final fight”

Ys️ “This is my final fight” Tyson Fury has said he will retire after his fight against Dillian Whyte ⬇ https://t.co/PbQ2ayGTRX

Fans and critics are sure to be skeptical of Fury’s claim of retirement. He’s previously retired, most notably in 2017 after his rematch against Wladimir Klitschko that fell through. ‘The Gyspy King’ later fought on and became one of the greatest comeback stories in the sport’s history.

However, if he does truly hang it up after his bout against Whyte, he’ll go down as one of the greatest heavyweights to ever compete.