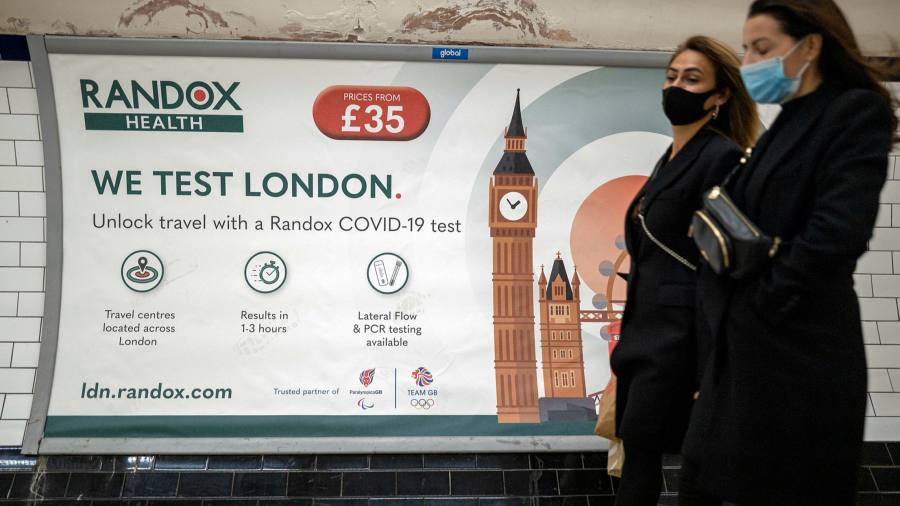 The UK government failed to properly document the decision-making process that led to the awarding of lucrative Covid-19 testing contracts to Randox, the diagnostics company embroiled in a parliamentary lobbying scandal last year, the public spending watchdog has found.

In November, Owen Paterson, a Conservative MP and former minister, resigned from his North Shropshire seat after he came under fire for lobbying the government on behalf of Randox as part of a £ 100,000 a year role with the company.

The lobbying row forced Downing Street into a U-turn following a backlash from MPs after the government initially blocked Paterson’s suspension and attempted to overhaul the standards watchdog behind a damning report into his conduct.

Gareth Davies, head of the National Audit Office, said that despite the “exceptional circumstances” at the start of the pandemic the Department of Health and Social Care’s “documentation for such large contracts was inadequate”.

By December, the Northern Ireland-based lab operator had won contracts worth a maximum value of £ 777mn. As of October, it had been paid £ 407mn by the government.

The NAO said it was “not able to provide assurance in the normal way” that procurement standards were met because the health department had “no documentation” of the contractual negotiations and conflict of interest assessments in the run-up to Randox’s first £ 132mn contract awarded in March 2020.

But, the watchdog added, it had “not seen any evidence that the government contracts with Randox were awarded improperly”.

The NAO criticized the government for failing to meet transparency standards, highlighting that the health department “did not disclose Randox’s attendance at four ministerial meetings as it should have done in line with transparency requirements”.

Minutes were only kept for two of eight meetings held between ministers and Randox in 2020 and 2021, the report noted.

It acknowledged that “the speed of action” required in the early part of the pandemic to build testing capacity “necessitated the use of emergency procurement without competitive tendering”.

However, the NAO concluded that the health department “did not document key decisions adequately, disclose ministerial meetings with Randox fully or keep full records of ministerial discussions involving Randox”.

“Government grasped the urgent need to increase the scale of testing early in the pandemic. But while it was fast on procurement, it was fast and loose on process, ”said Meg Hillier, chair of the House of Commons public accounts committee.

Hillier added that the “public is right to raise questions about whether [the government] was playing with a straight bat ”.

Randox welcomed the report’s finding of “no evidence of any impropriety” in the awarding of testing contracts.

The report “vindicates what both Randox and the government have always said, that these contracts were awarded on merit and in keeping with government protocols and regulations at a time of acute national emergency,” it said.

The company said that while it could not comment on government minuting of meetings, it could “categorically state that the awarding of contracts was not on the agenda at any of these meetings”.

The government stressed there were “robust rules and processes” to ensure conflicts of interest do not occur.

“At the start of the pandemic we took every possible step to build the largest diagnostic industry in UK history rapidly and from scratch – which has helped to limit the spread of Covid and save lives,” it said.

It added that contracts with Randox made “a significant contribution” to the UK’s Covid response.