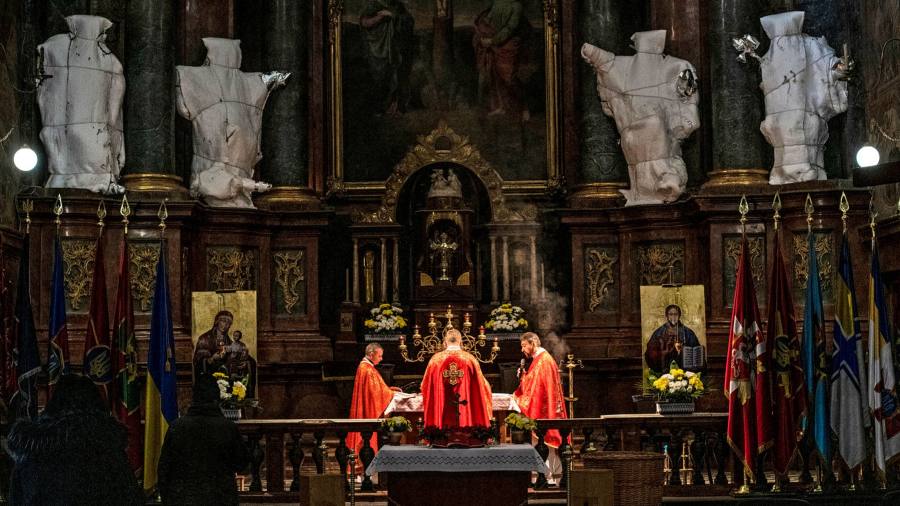 At Holy Trinity church in the Ukrainian city of Zhovkva, Father Vasyl Batyuk showed off one of the newer additions that is almost as precious as the centuries-old rows of religious icons that line its timber walls: a red fire extinguisher.

“Have you seen how many churches the Russians have bombed in the east?” the Ukrainian Greek Catholic priest asked, referring to the area hard hit by Vladimir Putin’s war. “We have to be prepared.”

The 300-year-old church, a Unesco world heritage site, has been covered with a fire retardant material to offer some protection from Russian attacks now in their eighth week. Authorities were able to remove a particularly treasured work by master icon painter Ivan Rutkovych from the early 18th century and take it to safety in nearby Lviv.

Russia’s invasion of Ukraine has laid waste to towns and cities, devastated communities and forced millions of people to flee their homes. The human suffering has been immense, but the damage to Ukraine’s cultural assets – its medieval churches, museums and historic monuments – has been of huge significance at a moment when its existence as an independent nation is under threat.

Across Ukraine, historic and cultural sites have been boarded up and sandbagged to shield them from missiles that could strike at any moment. Monuments and statues have been wrapped in padding or covered with protective sheeting, while museums have boxed up precious works of art and spirited them away to secret basements.

“The Russians are not only destroying military and infrastructure facilities, they’re also destroying cultural heritage sites,” said Pavlo Bohaychyk of the heritage office at the historical environment protection department in the city of Lviv.

The cobbled streets of Lviv’s old town are stuffed with historic sites related to the city’s Polish and Jewish heritage and an array of Orthodox, Armenian Apostolic and Ukrainian Greek Catholic churches.

For reasons of geography, the city, about 70km from the Polish border, has avoided the devastation elsewhere in Ukraine, but Bohaychyk expressed pride in the efforts to protect its history. “Lviv was one of the first cities to take measures to preserve cultural monuments and protect them from bombs,” he said.

Unesco said recently that at least 53 Ukrainian cultural sites had been damaged or destroyed since the invasion on February 24, with the destruction continuing in areas besieged or bombed by Moscow’s forces, particularly in the east of the country where the fighting is becoming concentrated.

“We have a damage control meeting every day and the list is lengthening,” said Ernesto Ottone, UNESCO’s assistant director-general for culture. “We are very worried about the situation, not only humanitarian but also for the protection of cultural heritage. Humanity’s heritage is indeed in peril. ”

Experts say churches, often hundreds of years old and, in the case of Holy Trinity, made from wood, are particularly vulnerable.

“Wooden architecture is very difficult to protect,” said Volodymyr Gerych of the International Council on Monuments and Sites, adding it “would be a tragedy” if a site of such religious and historical significance was damaged or lost. He recalled how thousands of churches were destroyed in the wake of the 1917 Russian Revolution.

Volodymyr Zelensky, Ukraine’s president, said last month that at least 59 buildings of “spiritual significance” had been damaged during the first four weeks of Russia’s invasion. Although the focus of the fighting is moving east, Russian rocket attacks on military and oil infrastructure in Lviv late last month, and another last week nearby in Radekhiv, meant the threat is never far away.

At Lviv’s national art gallery, works by the likes of Peter Paul Rubens and Myroslav Yahoda were packed up and moved to basements and storage facilities at the start of the invasion, according to Andriy Rybka, its head of exhibitions. “No was one prepared for a war of this magnitude so it was improvised. But given our museum experience we did it quickly enough, ”he said.

In southern Ukraine, efforts to save the contents of Odesa Museum of Western and Eastern Art were helped by the fact that a restoration project began in January just as fears of war were mounting.

“So the process of making the artworks safe had already been launched,” explained Ekateryna Miheytseva, the museum’s deputy director. “Museum employees were able to react quickly,” to save hundreds of works by artists including Caravaggio and Qi Baishi. These have been taken to “a secure place, the location of which we can not disclose during the war”, she added.

In the capital Kyiv, the green and gold Byzantine domes of Saint Sophia cathedral, which dates to the 11th century and is one of the most significant Christian sites in Europe, have remained untouched – a symbol of the country’s resistance.

Yet sites damaged or destroyed include as many as 29 churches, several museums and war monuments, as well as historic theaters in the besieged cities of Mariupol and Kharkiv.

In Chernihiv, recently liberated by Ukrainian forces, Dmytro Ivanov, deputy regional governor, said that several important landmarks, including an Orthodox church, were shelled by Russian troops. “It’s unfortunate that these monuments were destroyed,” he lamented.

Audrey Azoulay, UNESCO director-general, last month wrote to Sergei Lavrov, Russia’s foreign minister, to remind him of Moscow’s obligations to protect cultural sites under the 1954 Hague Convention, to which both Russia and Ukraine are signatories. Unesco said Lavrov had replied that Moscow was “well aware of its obligations”.

In Lviv, Father Nestor Kyzyk, priest of Saints Peter and Paul garrison church, extolled the urgency of “fighting for our future”, as the coffins of three of the soldiers killed in the fighting were being carried outside.

“Our history is our memory,” he said. “And without the past we will never have a future.”