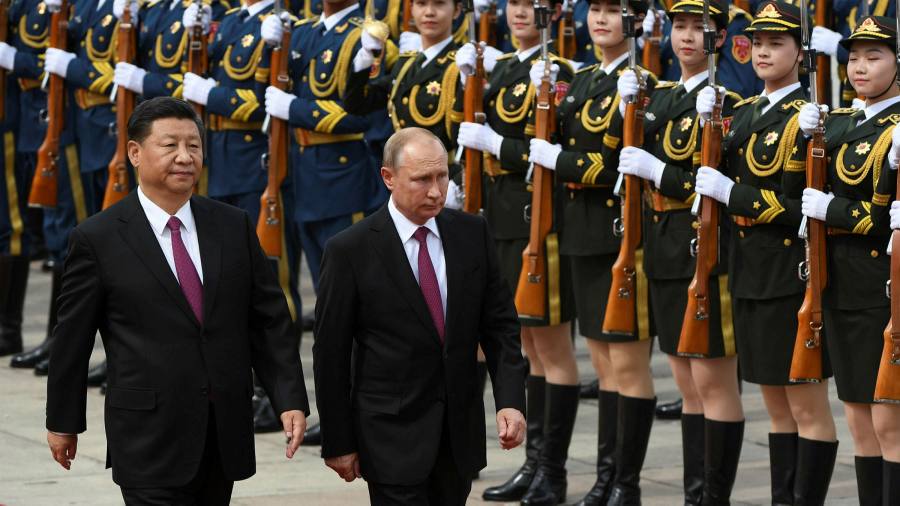 US and European warnings that Russia is about to invade Ukraine may spur fear in the west but in China the specter of war has triggered a different reaction.

The Ukraine crisis “will be a historic opportunity for us to solve the Taiwan problem”, said a Chinese nationalist blogger known as Huashan Qiong Jian last week. The events were a huge drain on the energy of the US and had diverted Washington’s attention away from China, the commentator wrote. “War in Ukraine will be a historical window for the unification of the motherland which we must not miss.”

Diplomats and longtime observers of Chinese policy dismiss the idea. But both the US and some of China’s neighbors worry that a war in Ukraine would make an already assertive Beijing even stronger.

“If war happens, it will be a huge distraction for the US. For China, that would be an opportunity of the same magnitude as 2014, ”said Alexander Gabuev, a China expert at the Carnegie Moscow Center think-tank, referring to the last Ukraine crisis when Russia backed a separatist movement in the country and annexed Crimea . That dispute ruptured Russia’s relations with the west and drove Moscow into China’s arms. Between 2013 and 2021, China’s share of Russia’s external trade doubled from 10 to 20 per cent.

Analysts believe that if the US and Europe follow through on threats to impose sanctions on Russia if it invades Ukraine again, Moscow would become even more dependent on Beijing.

Chinese chipmakers, which lost some business after the US ramped up export controls on cutting-edge semiconductor manufacturing technology, could still supply Russia with chips from mainstream but advanced production capacity, Gabuev said. If European companies, such as telecoms groups Ericsson and Nokia, had to stop working with Russia for political reasons, Chinese rival Huawei would be the biggest beneficiary, he added.

But the most significant questions looming over China’s potential role in a Ukraine conflict relate to its political and military partnership with Russia.

Although the two countries insist that they are not in an alliance, military cooperation in some areas has reached a level that rivals that between traditional allies.

“There is no ceiling on the development of our relationship, no limit,” said Zhao Mingwen, a former Chinese diplomat and Russia expert now at the China Institute of International Studies, the think-tank of the foreign ministry. “This gives our western friends a lot of room for imagination. You could say we are even more allies than allies. ”

Zhao added that Russia and China would support each other in conflicts that they viewed as provoked by external powers. “If China were forced to unify Taiwan by force and the US intervened, I believe Russia would not sit idly by,” he said.

Russia was being forced into moving against Ukraine by the US and Europe who had “squeezed its strategic space too strongly”, Zhao added.

Beijing has backed Russia with a statement reflecting that position. Russia’s “reasonable security concerns should be taken seriously and resolved”, Chinese foreign minister Wang Yi told US Secretary of State Antony Blinken last Thursday. Wang added that security in Europe could not be guaranteed by “strengthening or even expanding military blocs”, an apparent reference to Moscow’s demand for a guarantee that NATO does not accept more members in eastern Europe.

If Russia sought Chinese support in a Ukraine war, Beijing might be in a position to help.

Alexander Korolev, an expert in the Russian-Chinese security relationship at the University of New South Wales, said ever more frequent and substantive joint exercises, collaboration on weapons development, regular consultations on military and security issues and long-running military personnel exchanges are enabling the two militaries to jointly operate in real wars.

“They have introduced a joint command system, there are codes and signals that both Chinese and Russian forces can read, and intelligence is frequently exchanged between the two,” he said.

The two militaries would probably help each other with space infrastructure needed for tracking enemy missiles and guiding their own command, communications and targeting systems, analysts said.

“China is able to have ground-based radar stations in Russia and Russia in China, and that massively expands their footprint,” said Mark Hilborne, a defense expert at King’s College London.

Moreover, the two countries are seeking to link Glonass and Beidou, their global navigation satellite systems, which would give Moscow and Beijing a larger number of satellites than the US with GPS.

“Russia does not have large commercial operations for Glonass that the military could turn to as a back-up. So if its systems were overwhelmed or its satellites compromised in a conflict, it could get help from China, ”Hilborne said.

Many observers doubt it would come to that. Although China and Russia have pushed back against the US’s superpower status, they have been more cautious navigating regional or domestic issues. 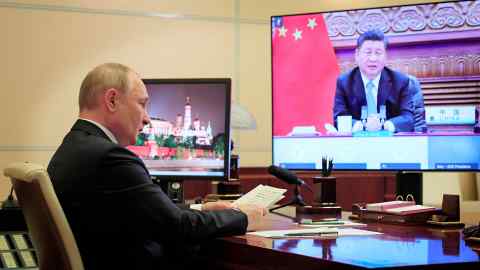 “Neither China nor Russia would make outrageously bold moves in areas where the other side has priority interests, and they do not back each other’s more controversial territorial claims either,” Korolev said. “That is what happened in the previous Ukraine crisis and during the 2008 Georgia war. China did not say much but continued business as usual. ”

Moscow and Beijing support each other most strongly when they share the goal of countering the US, he added.

If China views the Ukraine crisis as part of that global struggle, it could exploit it to erode US power, although observers said Beijing would not attack Taiwan.

A Ukrainian diplomat in Asia said he expected Beijing to step up efforts to undermine Japanese interests, for example by increasing the number of ships its coast guard uses to patrol waters around the disputed Senkaku Islands or Diaoyu Islands.