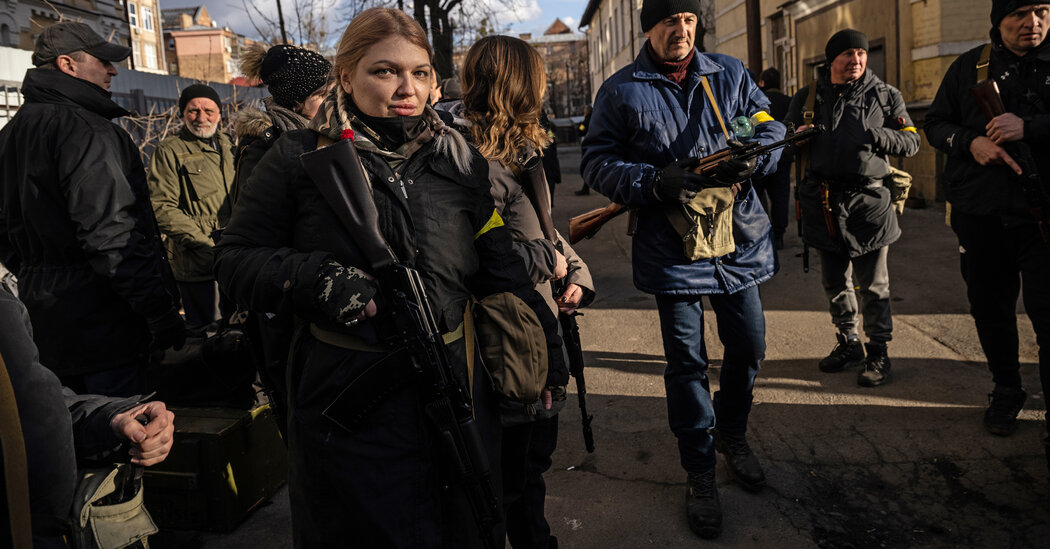 Ukrainian Civilians Arm Themselves to Fight the Russian Army in Kyiv

KYIV, Ukraine – Glass shards, bits of metal and shell casings, the detritus from a fierce and lethal street fight in Ukraine’s capital, Kyiv, lay scattered over hundreds of yards of pavement. Leading away from the site were bloody footprints.

The fighting, part of a seesaw battle over two nights in the northern parts of Kyiv, left Russian trucks and a tracked vehicle smoldering on a highway. And it signaled that, though vastly outgunned, Ukraine’s army and a growing corps of civilian volunteers are mounting a spirited defense of the capital.

While military experts say the odds are stacked against them, for now the combined Ukrainian defense forces have defied expectations by slowing and in some cases halting the Russian army’s advance, apparently upsetting Moscow’s war plans.

The change to a war footing has been swift, for some almost bewilderingly so. What just three days ago had been a bustling, modern European capital, with copious restaurants, bars and cafes, slipped into an eerie war footing faster than seemingly imaginable. Vans and cars with armed men without uniformed careened along the streets. Checkpoints went up seemingly at every stoplight, with men and women in civilian clothes, carrying rifles, stopping cars.

“When I heard the explosions I decided that I was ready,” said Olena Sokolan, a business manager who received a rifle to help defend the capital. “I am an adult woman, I am healthy and it’s my responsibility.”

The newly armed civilians and members of various paramilitary groups are fighting under the loose command of the military in an organization called the Territorial Defense Forces.

“In the city itself, the territorial defense detachments are working quite effectively,” Mykhailo Podolyak, an adviser to the Ukrainian presidential chief of staff, said in a statement Saturday morning. “It turned out that people are coming out, defending their homes. It was not expected by analysts of the Russian General Staff. “

At an army recruitment center where Kalashnikov rifles were being handed out, several dozen men milled about. Before receiving their guns, they were asked to form ad hoc units of about 10 men each and choose a commander, several of the men in line said.

One group was dressed in a motley assortment of sweatpants and camouflage jackets, some in tennis shoes and others in hiking boots. But they all bore yellow arm bands identifying them as members of the Territorial Defense Forces.

The new unit walked out the driveway of the recruitment center and off into the city, where booms could be heard through the afternoon. “Glory to Ukraine!” the other men waiting for their rifles yelled. “Glory to its heroes!” the members of the new unit shouted back.

Men from their 20s to late 50s, from a range of backgrounds, showed up. Igor, 37, an economist for an online retailing company, who did not want his last name published for safety reasons, stood in line for his gun. He spoke at barely a whisper and his lips trembled. The dull thud of bombs or artillery could be heard in the distance.

“I never served in the army or with the police or anything,” he said. He said he hoped to be able to figure it out. He was worried, he said. “But people who are really afraid are sitting at home. They are not out here now. ”

“Everybody in our country needs to defend – women, girls, everybody,” said Denis Matash, 33, the manager of Milk, a Kyiv nightclub, standing in line with about 50 other men at the recruitment center. “I do not think they understand where they came from,” he said of the Russians. “Look at what is happening here.”

Grigory Mamchur, 40, who works as a male strip dancer at the Milk nightclub, part of the now shuttered but once booming nightlife scene in Kyiv, was also in line for a Kalashnikov.

“There was not even anything to think about,” Mr. Mamchur said. “We will defend the country however we can. This could be our last chance. ”By Saturday in Kyiv, a city with a population before an outflow of evacuees over the past two days of 2.8 million people, signs pointed to a bloody battle ahead, even if Russian forces should claim victory by quickly capturing government buildings.

At the site of the 4 am fight with Russian vehicles and possibly also infantry – which took place along a central thoroughfare, Victory Prospect, and came within less than a mile of the city’s central Maidan Square – Ukrainian soldiers were already digging new trenches Saturday.

The streets, deserted a day earlier, came partly back to life. People stood in lines at ATMs, stocked up on essentials, donated blood or went to sites where guns were handed out. Air raid sirens wailed every hour or so.

Whatever the efforts, military analysts and even Ukrainian generals speaking late last year have conceded the Ukrainian army has little chance of holding out for long and it’s unclear how civilians with assault rifles might stop artillery from bombing the city or Russian tanks from rolling into the streets . After the Saturday morning fight on the street that left burned Russian vehicles behind, the Ukrainian Security and Defense Council Secretary, Oleksy Danilov, issued a statement around 7 am saying, “We are stopping the horde, so far as we can.”

But such assessments have not dented the determination of Kyiv’s citizens, who have protested or fought on their streets for independence twice before in this century, in 2004 and again in 2014.

Ihor Zhaloba, 58, a professor of history at a Kyiv university and a researcher at the Institute of History at the Ukrainian Academy of Sciences, said everybody in his family worried for him but nobody asked him not to volunteer.

“My wife worried; I worried; everybody is worried, ”he said in an interview at the recruitment center. “But nobody told me not to do this, not my wife, not my daughters. They all think I should be here. ”

About a mile away in another district in the city center, two dozen men and women waited in line to donate blood at the Regional Health Care Center.

“I’m going to donate some blood, that’s the least I can do,” said Oleksandr Horbunov, 24, a programmer, who said he had not volunteered to fight because his parents were deeply worried.

“I believe in our soldiers,” he said. “They will protect us. They have resolve. Everybody does. ” He added: “They said Kyiv would fall in two days, and well, it’s been three days and I do not see any Russian flags in the city.”

Iryna Koziienko, 42, a psychologist, said she came so nurses could “take just a little of my blood to support the bodies of my people.”

After the attack began on Kyiv on Friday, she said, “I am sometimes scared but I am also angry. You see this wonderful weather today? It’s sunny, it feels like spring. The birds are singing. I do not want to have war on my land. “

At the site of the fighting Saturday morning, bullets had hit shop windows and a car hundreds of yards away. A tank had churned tracks into the asphalt of Victory Prospect. The hulks of Russian military vehicles on the streets of Kyiv had burned to a rich, rusty orange color and an acrid smell wafted off them.

Walking in this area created a tinkling noise, from shorn pieces of metal from the destroyed vehicles, shell casings, broken glass and other debris. Small pieces of human flesh were scattered around the site from an explosion.

A trail of blood splatters and bloody footsteps led into an underground parking garage, suggesting a wounded soldier had made his way inside.

Several families were sheltering in the parking garage, including an elderly woman and a man with a baby, sitting on mats covered in blankets in the parking spaces.

Elena, 36, a human resources manager who did not want her last name made public out of concern for her safety, said she had been inside the garage during the battle. She listened to the cacophony of snaps and pops of small-arms fire and thunderous explosions outside. She was not sure how long it lasted. “It was an eternity for me,” she said. 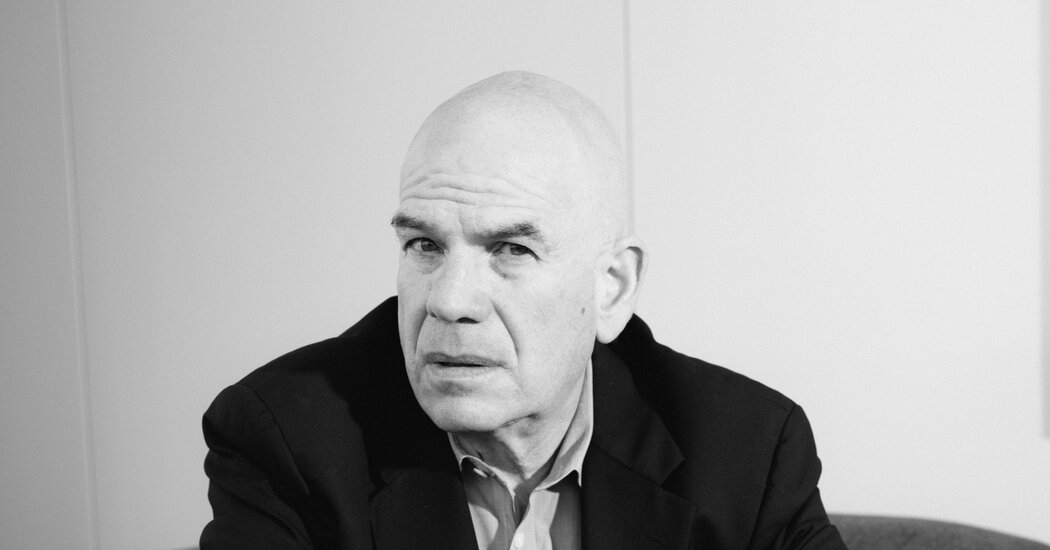 ‘The Wire’ Creators, David Simon and Ed Burns, on the Show 20 Years Later

David Simon concedes that it takes a special kind of [expletive] to say, "I told you so.""But I can not help it, OK?" he said recently. “Nobody enjoys the guy who says, 'I told you so,' but it was organic....

McDonough told CNN's Jake Tapper on "State of the Union" that a proposed amendment from Pennsylvania Republican Sen. Pat Toomey would put "a year-on-year cap" on what the VA can spend to care for veterans suffering from exposure to burn... 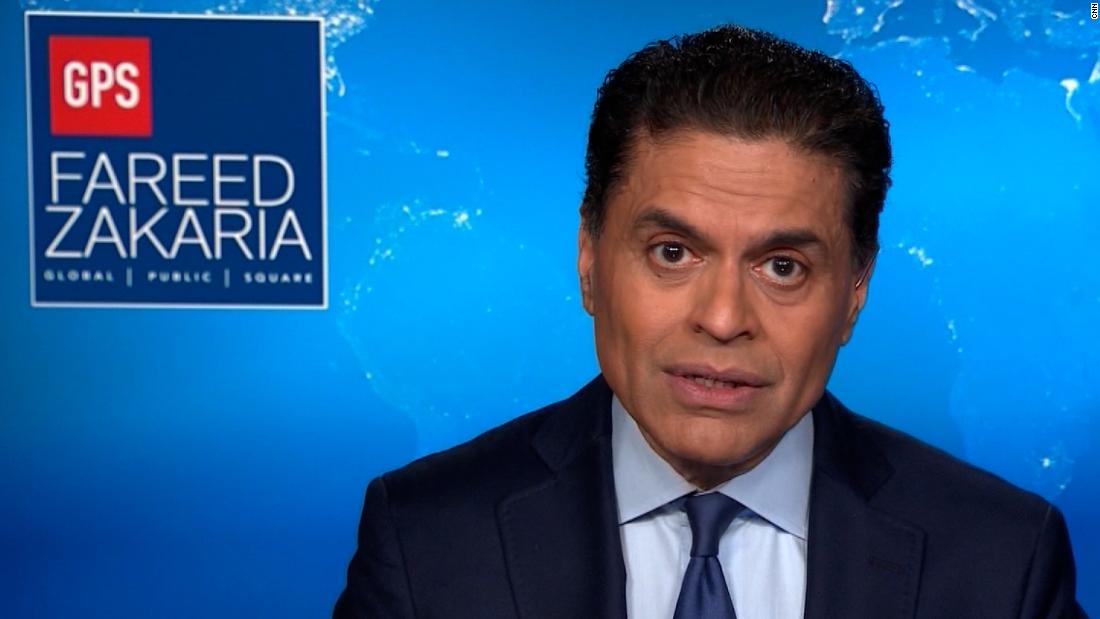 Fareed gives his take on why the Russian president's hand of cards is not as strong as it appears in his standoff with the West over Ukraine.