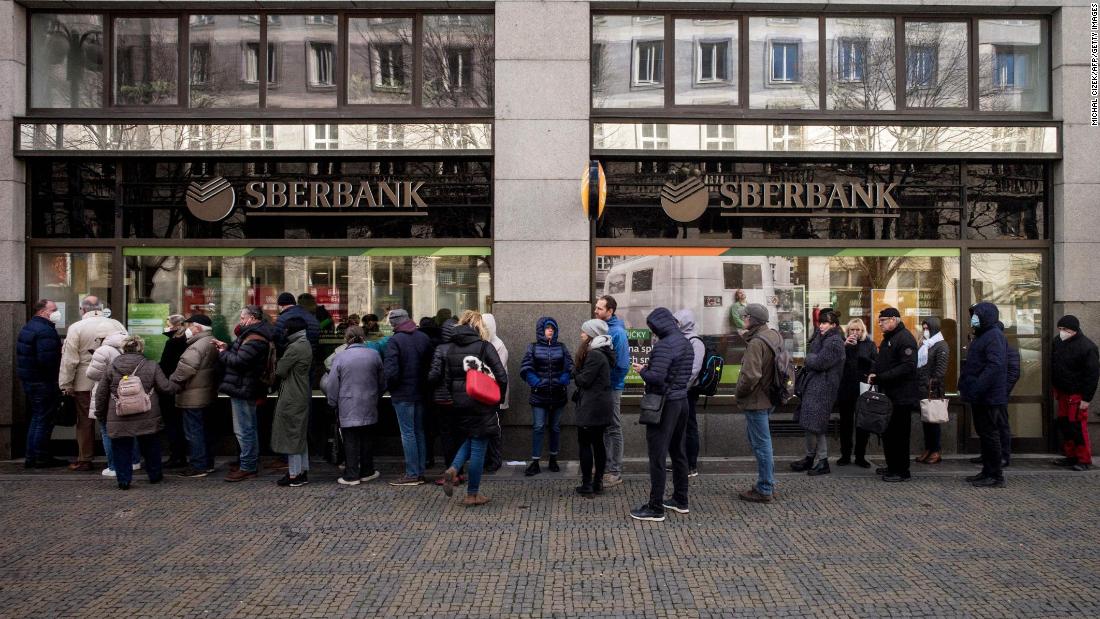 Now, in the wake of the Russian invasion and new sanctions announced by President Joe Biden, many of those lobbying firms are rushing to cut ties and drop their lucrative contracts.

At least six lobbying firms that previously represented now-sanctioned Russian banks and companies tied to a Russian natural gas pipeline terminated their contracts or representation this week, according to statements and federal lobbying disclosures.

The exodus marks the rupture of a Moscow-to-K-Street conduit that has long employed former federal officials and members of Congress of both parties, experts said.

“For anybody that’s representing a Russian entity in Washington, DC, it’s an uphill climb … that has just gotten a lot steeper,” said Benjamin Freeman, a research fellow at the Quincy Institute for Responsible Statecraft, a foreign policy think tank, who has written a book on foreign influence. “It’s going to be hard to find a sympathetic ear for any of these Russian clients on the Hill right now.”

Some of the banks Biden targeted with sanctions, including VTB, Russia’s second-largest, were put under “full blocking” sanctions, which freeze organizations’ US assets and prohibit them from doing business in the country. That means it would be illegal for lobbyists to work for them unless they receive a license from the Treasury Department, according to legal experts.

Dropping contracts with fully blocked banks “is not a gesture in solidarity with Ukraine, this is a requirement under US law,” said Erich Ferrari, an attorney who specializes in US economic sanctions. Lobbyists could face prosecution for running afoul of sanctions laws, he said.

But even for lobbyists representing firms that aren’t fully blocked, it would be a “real reputational risk for these firms to keep representing these sanctioned entities,” said Freeman, who called ties to Russia a “scarlet letter” in DC.

Biden’s move to impose sanctions on Russia is intended to make Vladimir Putin’s government pay a financial price for the attack on its neighbor – the most significant military invasion in Europe since World War II. The sanctions will “impose severe costs on the Russian economy” and “exceed anything that’s ever been done,” Biden said in a speech Thursday.
Russian stocks fell precipitously in the wake of the invasion and sanctions – but Putin’s government has been preparing for stronger sanctions for years, so it’s unclear how much economic damage the measures will do in the long term.

The Russian banks did not respond to CNN requests for comment about their lobbyists abandoning them, but several issued statements saying they were prepared for the sanctions or calling Biden’s actions politically motivated. “We have worked through several plans to counter the sanctions in ways which minimize the negative consequences for our clients,” a spokesperson for VTB wrote in an email.

VTB has had one of the longest-running lobbying presences in DC among Russian banks. It has paid lobbying and law firm Sidley Austin more than $ 2 million since 2015, according to disclosures filed under the Foreign Agents Registration Act.

Among the company’s lobbyists were Rick Boucher, a former Democratic congressman from Virginia, and George Madison, the former general counsel of the U.S. Treasury Department. A spokesperson for Sidley said Friday that VTB is “no longer a client” of the firm “in compliance with US sanctions.” The spokesperson declined to say when the decision had been made to end representation, but Sidley was still receiving $ 30,000 a month from VTB as of September 2021, according to its most recent disclosure.
VTB hired Sidley and other lobbyists after federal officials placed more limited sanctions on the bank following Putin’s takeover of Crimea. In 2016, lobbyists for VTB arranged a meeting between the bank’s chairman and State Department official Daniel Fried, who worked on Russian sanctions, and also invited him to a VTB-sponsored gala – part of a wide-ranging influence campaign, as the Center for Public Integrity first reported in 2018.

Fried, who is now a fellow at the Atlantic Council, told CNN that lobbying had no impact on him or his State Department colleagues.

“I said I’ll talk to him but I will not go to his fancy banquets,” Fried said of the bank’s chairman. “I told him, ‘You’re part of Putin’s system, you benefit from that system, that system is responsible for aggression to Ukraine, and you know perfectly well why we’s hitting you.’ “

After he left the State Department, Fried said, he had personally been approached by lobbyists offering “bucket loads of money” to work for oligarchs trying to avoid sanctions, but he turned down the offers. “What am I going to do, buy another Prius?” he asked.

Boucher was not the only member of Congress to advocate for a Russian bank. David Vitter, a former Republican US senator from Louisiana, and Toby Moffett, a former Democratic congressman from Connecticut, lobbied in recent months for Sovcombank, another bank Biden sanctioned this week.
Their firm, Mercury Public Affairs, signed a $ 90,000-per-month contract with Sovcombank in January, and Vitter lobbied against the bank’s inclusion in sanctions legislation being debated on Capitol Hill, federal filings show.
Sovcombank “would be an extremely counterproductive sanctions target” due to its “deep ties to US and western institutions,” Vitter wrote in one message disclosed by Mercury in a Justice Department filing. He said that Sovcombank manages pension funds, employment insurance or savings for more than 40 major US companies, and he argued that the bank being targeted for sanctions “would have major negative market consequences.” The firm also reported that it had disseminated a 28-slide PowerPoint presentation that highlighted Sovcombank’s environmental sustainability investments and its commitment to diversity.

A Mercury spokesperson said the firm had terminated its contract with the bank Thursday when it was included in Biden’s sanctions.

Among the other companies sanctioned by Biden, a US subsidiary of Sberbank, Russia’s largest bank, paid more than $ 800,000 to Venable LLP for lobbying since 2017, according to Senate records. A former congressional staffer and Treasury Department lawyer registered as lobbyists for the subsidiary, and their work included monitoring legislation and administrative actions related to sanctions, the firm’s filings said.

A Venable spokesperson said the company had terminated its contract with the Sberbank subsidiary on Friday.

And VEB bank, which was sanctioned by the Biden administration earlier this week, paid $ 62,500 a month to Geopols, a DC communications firm, from 2019 to 2020. Geopols “provided advice and consultation on public affairs policy and media interactions” and met with ” US government officials and their staff, and members of the media to discuss potential new sanctions legislation, “according to filings.
Grace Fenstermaker, the firm’s principal, told CNN that Geopols had not worked for VEB since May 2020, but the firm was still registered with the federal government as representing the bank until Tuesday, according to a federal filing. The decision to terminate the registration was made before Biden’s sanctions announcement, Fenstermaker said.
Other Russian firms that lost DC lobbying contracts included the companies behind the Nord Stream 2 pipeline, which had been set to carry 55 billion cubic meters of natural gas per year from Russia to Europe before it was blocked by the German government this week.
Lobbying firms Roberti Global and BGR Government Affairs both said this week that they would stop representing Nord Stream 2 AG, the pipeline’s Swiss parent company, which is owned by Russian gas giant Gazprom and was sanctioned by Biden on Wednesday. The lobbying firms’ exit was first reported by Politico.
Nord Stream 2 AG has paid Roberti Global more than $ 9 million for lobbying since 2017, according to Senate lobbying disclosures – making it one of the largest lobbying contracts in recent years, according to Politico. It paid BGR an additional $ 2 million over the last two years, including $ 420,000 so far in 2022 before the contract was terminated on Wednesday. A spokesperson for Nord Stream 2 AG did not respond to a request for comment.

McLarty Inbound, another lobbying firm, also ended its representation Wednesday of five companies that had invested in Nord Stream. The firm had received $ 3.5 million from the investors since taking them on as clients in 2017, and the lobbyists working for them included Richard Burt, a former US ambassador to Germany and chief negotiator in US-Soviet arms control talks.

Spokespeople for Roberti Global, BGR and McLarty confirmed the contracts had been terminated but declined or did not respond to interview requests.

The Nord Stream lobbying effort appeared to have scored some victories, said Freeman, the foreign influence expert – at least until this week. Biden decided not to impose sanctions on the pipeline company last year, and in January, Democrats in Congress defeated an effort led by Sen. Ted Cruz, a Texas Republican, to mandate sanctions. The pipeline was set to begin delivering gas later this year.
But after Russia ordered troops into Ukraine, Biden reversed course and imposed sanctions on Nord Stream, while German Chancellor Olaf Scholz said his government would halt certification of the pipeline.

“What this shows is regardless of how successful a lobbying campaign may be, a foreign power can completely undo any wins with their foreign policy blunders,” Freeman said. “Putin’s decision to invade Ukraine has completely undone the work of all of these influence campaigns.”

(Anna Moneymaker / Getty Images)The Supreme Court moments ago struck down a New York gun law that places restrictions on carrying a concealed gun outside the home. It's the first major Second Amendment opinion in more than a decade: In... 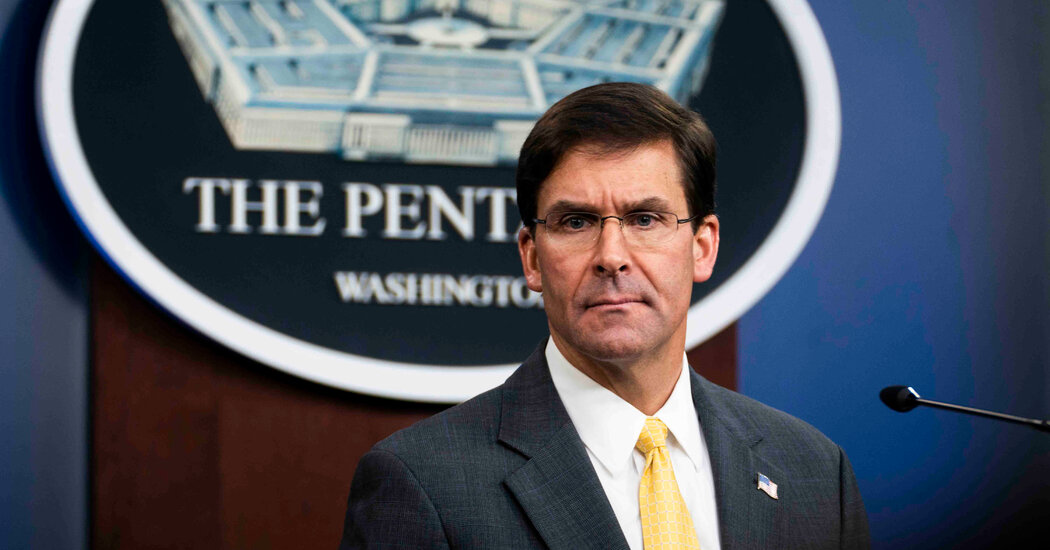 A memoir by the former defense secretary, Mark T. Esper, about his tenure in the Trump administration will be published with "minimal redactions" after he sued the agency he once led because it wanted to block information in the manuscript,...