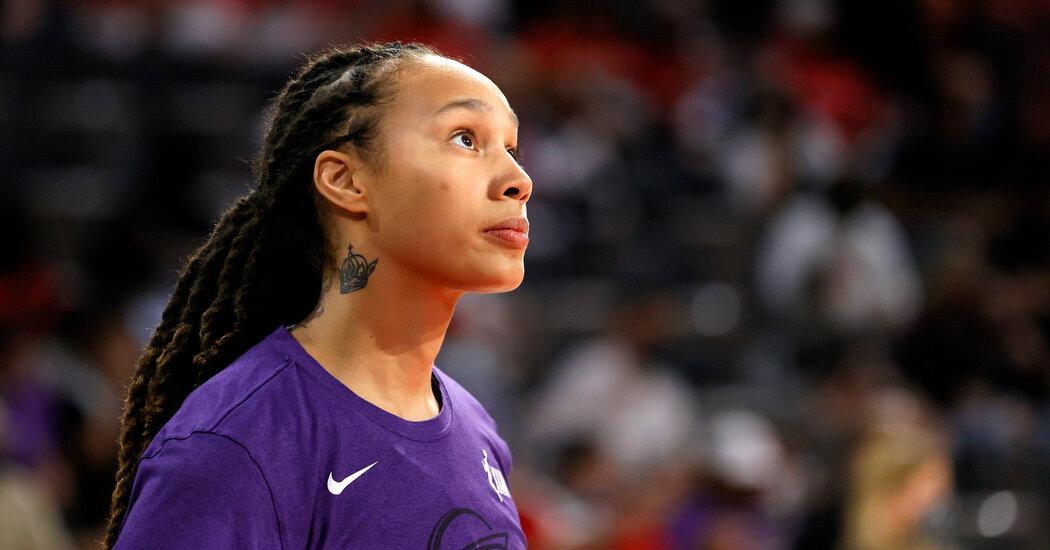 One of the last times Brittney Griner, a two-time Olympic gold medalist and seven-time All Star center for the women’s professional basketball team in Phoenix, appeared in public, it was on a Russian airport security video.

She wore a Black Lives for Peace sweatshirt and rolled her luggage through security, where officers with Russia’s Federal Customs Service said they had found in her bag illegal vape cartridges that contained hashish oil. The authorities detained her on drug charges.

Now, a month later, as Ms. Griner – too tall at 6-foot-9 for her top-bunk mattress – languishes in a cell she shares with two Russian inmates also accused of drug trafficking in a pretrial detention center near Moscow, American officials have finally been able to see her.

“A consular official was able to visit Brittney Griner today and found her to be in good condition,” Jennifer L. Palmer, a spokeswoman for the US Embassy in Moscow, said Wednesday. “We will continue to do everything we can to see to it that she is treated fairly throughout this ordeal.”

Some supporters in Moscow and Washington are wary of raising Ms. Griner’s profile too high, or linking her case to the war in Ukraine and thus politicizing her as a pawn in a great power struggle. Family and friends of Ms. Griner, who if convicted faces 10 years in prison, have followed that advice, maintaining silence in the hopes of a back-channel resolution.

Russia experts largely concur, saying that given the harsh sanctions imposed on Russia by the United States and its Western allies, a public pressure campaign adds little leverage, while more subtle attempts at de-escalation might yield some results.

But as her detention has been prolonged to at least May, some frustrated supporters complain that the government is not doing enough, and are calling for a more vocal pressure campaign to free one of the most prominent and decorated athletes in American sports.

“That keeps it in the public eye, so that we the people can keep demanding that the government do everything in its power to help Brittney,” said Debbie Jackson, Ms. Griner’s high school basketball coach in Houston, who said she believed there would be more attention on her case if she were a man playing in the NBA

Ms. Griner could hardly be more prominent: championships in college and professional basketball; a No. 1 overall selection in the 2013 draft; the Olympic medals; and four Euroleague crowns. And yet, the prospect of her being detained has been met mostly with silence.

That is even more jarring because her sport has taken on a reputation for speaking out and raising social consciousness. Ms. Griner, the first openly gay athlete endorsed by Nike, contributed to that tradition by helping defeat a Texas bill that mandated transgender people use restroom facilities consistent with the gender of their birth certificate.

The vacuum of outrage around the case may be a result, as Ms. Jackson and others believe, of Ms. Griner being a dominant woman in the WNBA, rather than a male star in the NBA Or it could be deference to the family’s desire to keep quiet and not upset any diplomatic efforts.

But what is clear, according to Russia experts, is that the timing of Ms. Griner’s detention made an already excruciating situation worse.

“The family and advocates of people being held in Russia on trumped-up charges face a horrible dilemma: Will quiet outreach pay off better than a public pressure campaign?” said Andrew S. Weiss, a Russia expert at the Carnegie Endowment for International Peace.

“Any calculation they might make is vastly complicated by the pressures imposed by the war in Ukraine,” he added, “and the near-total collapse of effective lines of communication between the US and Russian governments.”

According to one State Department official, part of the strategy has been to keep Ms. Griner’s case as low-key as possible to prevent the Russian authorities from seeing her as a valuable asset that increases their leverage. The official also said increasing focus on Ms. Griner could complicate her consular access, which has been a problem for other Americans detained in Russia.

But Jason Rezaian, a writer for The Washington Post’s Global Opinions section whom Iran unjustly imprisoned for 544 days, said he fell squarely in the “amping up public pressure camp,” especially if an authoritarian state-run news media published the detention.

Calling more attention to a case might make the jobs of government officials “harder, in that they have to address this problem,” he said. “They would love nothing more sometimes than not to have to deal with these problems.”

Mr. Rezaian said that in his own experience, but also in coordinating with other families held hostage by authoritarian governments, “everyone is always told to keep it quiet” to better their chances of release. But public pressure, he said, can work.

Still, other former hostages acknowledged that it was an extremely difficult decision.

“I think it’s a question all families struggle with. Six years on, I do not think I know what the best solution is, to be honest, ”Richard Ratcliffe, the husband of Nazanin Zaghari-Ratcliffe, a British-Iranian woman held for six years by the Iranian authorities, said on Monday .

But Ms. Zaghari-Ratcliffe appeared to appreciate the benefits of having one’s duty on the public radar.

“It has been cruel what happened to me,” she said. But she added that although her release had taken a long time, others remained in prison and she “was the lucky one who got to be recognized internationally.”

In the meantime, Ms. Griner, 31, whose wife, Cherelle, has appealed for privacy “as we continue to work on getting my wife home safely,” remains in prison, with limited visibility.

“It is our expectation that this will not be a one-off visit,” Ned Price, the State Department’s spokesman, told reporters in Washington.

What to Know About Brittney Griner’s Detention in Russia

Why was she in Russia? Griner was in Russia playing for an international team during the WNBA off-season. Trading rest for overseas competition is common among the league’s players for many reasons, but often the biggest motivation is money.

Does this have anything to do with Ukraine? Griner’s detention comes during an inflamed standoff between Russia and the United States over Russia’s invasion of Ukraine, but it is still unclear whether Russia might have targeted Griner as leverage against the United States.

Yekaterina Kalugina, a member of the public monitoring group allowed to visit prisons and check on inmate conditions, had a chance to visit Ms. Laughs last week. She said in an interview that the basketball star “has a positive attitude” and had received from her lawyers shampoo for her dreadlocks and some books, including Dostoyevsky’s “Demons.”

Her two cellmates speak some English, but the three, allowed a daily walk and a biweekly shower, mostly pass their time watching Russian television. Ms. Griner has been unable to send a letter to her family in the United States, Ms. Kalugina said, because they can not register on the Russian prison’s service website.

“She does not pull her hair out,” Ms. Kalugina said. “She keeps herself calm and dignified.”

The American embassy in Moscow said it has now procured a privacy waiver to speak about Ms. Griner’s case.

The US ambassador to Russia, John Sullivan, has pressed Ms. Griner’s case with Russian officials, when given the chance. That occurred earlier this week, when Russia’s Foreign Ministry summoned Mr. Sullivan to express regret that President Biden for calling President Vladimir V. Putin of Russia a “war criminal.”

During the meeting, Mr. Sullivan, whose uncle served as the last US ambassador in Tehran and was briefly held hostage in the American embassy during Iran’s 1979 revolution, demanded that the Kremlin follow international law and allow consular access to detained US citizens.

But beyond getting that access, it is not clear what pressure – especially publicly – would help get Ms. Griner home.

Russia has for years sought the release of two intelligence agents arrested by American officials. In an apparent response, Russia arrested Trevor Reed, a former U.S. Marine, who is serving a nine-year sentence on charges of assaulting police officers, which his family argues were politically trumped up.

In 2020, another former Marine, Paul Whelan, received a 16-year jail sentence in an espionage trial that was itself secret. Secretary of State Antony J. Blinken has brought up their cases to his Russian counterpart, but the United States seems to have resisted a prisoner swap.

Ms. Griner’s case is much different. Like many WNBA players, she plays abroad in the off-season to supplement her salary, in her case for the Russian team UMMC Ekaterinburg. Her detention would appear to set a dangerous precedent for athletes, including Russian athletes, in tournaments around the world.

Ms. Griner was one of the first women to dunk a basketball in a college game and holds the NCAA distinction, among men and women, for scoring at least 2,000 points and blocking 500 shots. But during this month’s NCAA tournament, the showpiece event of the college season, her name has hardly been uttered.

One exception was NBA player Chris Boucher, a forward for the Toronto Raptors, who last weekend brought her situation up in a postgame interview.

“I just want to talk about Brittney Griner,” he said. “She’s in Russia, and it’s like nobody is talking about it. So, it would be good to put attention on that because she’s still holed up over there. ”