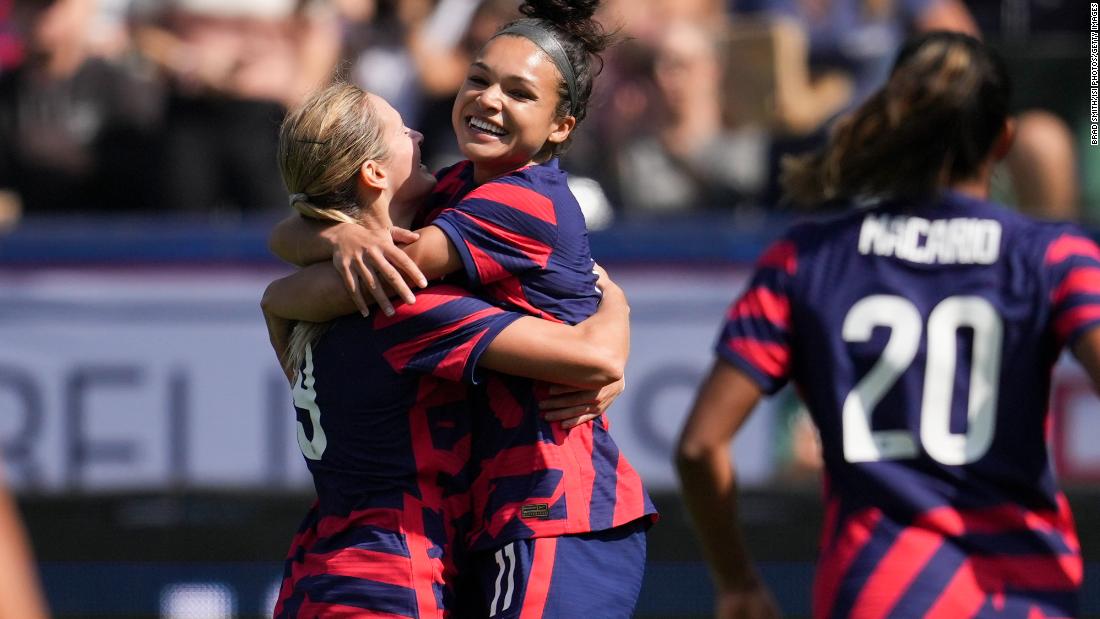 The dispute dates back to March 2019 when the USWNT filed a gender discrimination lawsuit against US Soccer.

The agreement will see the women’s and men’s national teams receive an equal rate of pay in all friendlies and tournaments, including the World Cup.

Tuesday’s joint statement said, “We are pleased to announce that, contingent on the negotiation of a new collective bargaining agreement, we will have resolved our longstanding dispute over equal pay and proudly stand together in a shared commitment to advancing equality in soccer.”

As part of the agreement, US Soccer will pay $ 22 million to the players in the case as well as an “additional $ 2 million into an account to benefit the USWNT players in their post-career goals and charitable efforts related to women’s and girls’ soccer . “

The settlement is contingent on the ratification of a new Collective Bargaining Agreement (CBA) for the USWNT.

“Getting to this day has not been easy,” the statement said. “The US Women’s National Team players have achieved unprecedented success while working to achieve equal pay for themselves and future athletes.

“Today, we recognize the legacy of the past USWNT leaders who helped make this day possible, as well as all of the women and girls who will follow. Together, we dedicate this moment to them.

“We look forward to continuing to work together to grow women’s soccer and advance opportunities for young girls and women in the United States and across the globe.”

How did we get here?

Tuesday’s agreement marks the resolution of a back-and-forth dating back to March 2019, when the USWNT filed a gender discrimination lawsuit against US Soccer.
With 28 of the team’s players listed as plaintiffs, the USWNT’s claim that they were paid less than the men’s national team was rejected in May 2020 by federal judge Gary Klausner, who ruled that the women’s side played more matches and made more money than their male counterparts.
Following the decision, two-time World Cup-winning USWNT players Christen Press and Tobin Heath told CNN of their desire to continue the fight for equal pay, with Heath describing the stakes as “bigger than anything we could ever win in football.”

In July 2021, the USWNT filed an appeal against the May 2020 ruling, saying the decision “defies reality” and was “legally wrong.”

US Soccer tweeted a statement in response to the team’s appeal, saying the decision “correctly held that the Women’s National Team was paid more both cumulatively and on an average per-game basis than the Men’s National Team.”

In September 2021, a US Soccer offer of identical contracts for the men’s and women’s national teams was labeled “PR stunts” by the United States Women’s National Team Players Association (USWNTPA).

“USSF’s PR stunts and bargaining through the media will not bring us any closer to a fair agreement,” the USWNTPA, which acts as a union for the players, said in a tweet.

“In contrast, we are committed to bargaining in good faith to achieve equal pay and the safest working conditions possible. The proposal that USSF made recently to us does neither,” it added.

The federation responded to the USWNTPA’s social media post soon after, tweeting“An offer on paper of identical contracts to the USWNT and USMNT, and to discuss equalizing prize money, is real, authentic and in good faith. A publicity stunt is a 90-minute one-sided movie.”