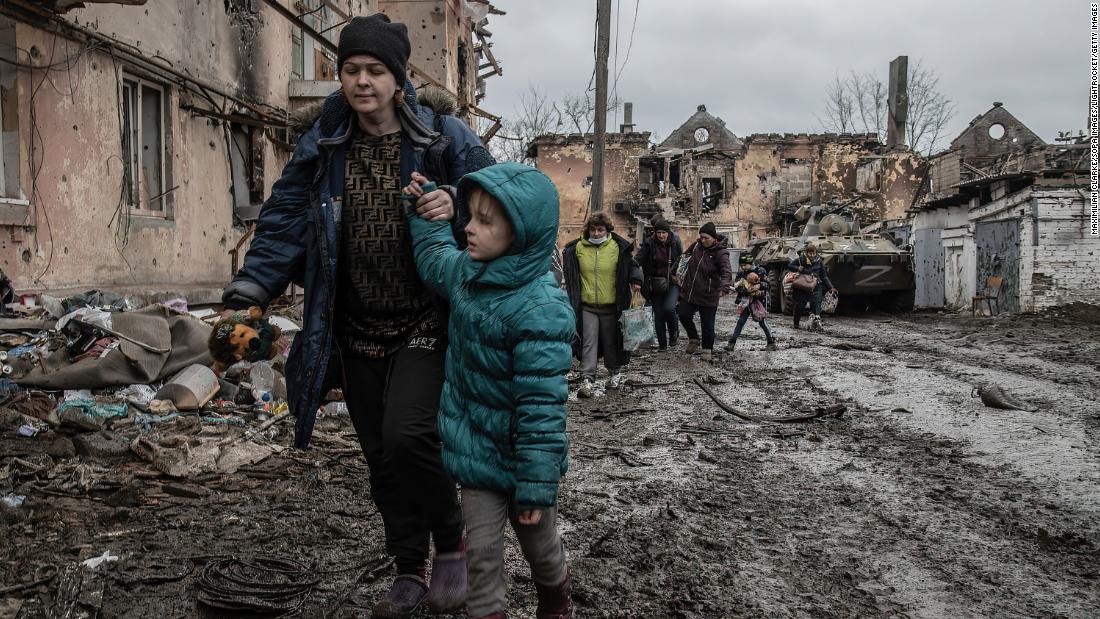 Those moves were rich with symbolism about Western intentions to keep tightening the vise around Russia’s economy as the US and its allies try to isolate Putin on the world stage. But they looked feeble against the backdrop of Putin’s provocative test launch of Russia’s new intercontinental ballistic missile and the allies’ inability to save civilians as the latest evacuation attempts from Mariupol collapsed Wednesday.

US officials downplayed the importance of the missile test, noting they had been alerted of the launch window through international notification agreements, that they had tracked the missile’s path and believe it is not yet operational in Russia’s inventory. But after weeks of saber-rattling from Putin – including his February order putting nuclear forces on high alert – the Russian leader clearly hoped the move would unnerve the US and its allies as they weigh their next moves to help Ukraine.

Putin’s threatening posture was evident in his statement after the test, when he argued that the weapon would “strengthen the combat potential of our armed forces, reliably ensure Russia’s security from external threats and provide food for thought for those who, in the heat of frenzied aggressive rhetoric, try to threaten our country. ”

Speaking to CNN +’s Chris Wallace on Wednesday evening, White House press secretary Jen Psaki said Russia’s test launch would not change the White House’s posture on aiding Ukraine and that the US would announce a new round of security assistance to Ukraine “in very short order.”
But the Russian leader’s latest chess move stood in marked contrast to the US decision in March to cancel a planned test of its Minute Man III intercontinental ballistic missile, which was described by Pentagon spokesman John Kirby at the time as an effort to avoid “any actions” that could be misunderstood or misconstrued. ”

“I think the timing of this is very much about coercive threats to the West,” Jeffrey Edmonds, a former CIA military analyst and former director for Russia on the National Security Council, said of Russia’s missile test on CNN’s “Newsroom” Wednesday. “The more that he’s losing in Ukraine, the more we’re going to see this kind of escalated rhetoric.”

The inability of the US and its allies to sway Putin and halt the humanitarian disaster that continues to unfold in Mariupol was underscored by yet another failed attempt to evacuate scores of civilians, including women and children, who lined up in broad daylight in that embattled port city ​​Wednesday hoping to board buses that would ferry them to safety.

Ukrainian President Volodymyr Zelensky said during a news conference with European Council President Charles Michel in Kyiv on Wednesday that about 120,000 people remain trapped In Mariupol and the “crimes that are happening there are far more scary and large-scale than in Borodianka,” a town where the bodies of many civilians were recently found after it was occupied by Russian forces.

Mariupol Mayor Vadym Boichenko had urged residents to evacuate via three assembly points Wednesday – an operation that was supposed to begin in the early afternoon and proceed west from Mariupol towards the Russian-held city of Berdiansk and then onward through the Ukrainian-held city of Zaporizhzhia.

US Under Secretary of State for Political Affairs Victoria Nuland warned on CNN’s “New Day” that similar arrangements had “fallen apart a number of times before” because they hinged on the willingness of the Russians to allow that safe passage.

“Due to the lack of control over their own military on the ground, the occupiers were unable to ensure a proper ceasefire,” she said, using a term to describe Russian military forces. “Also, due to the inherent disorganization and negligence, the occupiers were unable to provide timely transportation of people to the point where dozens of our buses and ambulances were waiting.”

Vereshchuk said they would try again Thursday. And two top Ukrainian officials – Parliamentary Majority Leader David Arakhamia and Mykhailo Podolyak, an adviser to the President’s chief of staff – said they were standing by in the hopes of heading to Mariupol to negotiate the evacuation of both civilians and Ukrainian forces who have been holed up in a steel plant in the city surrounded by Russian soldiers.

Retired US Lt. Gen. Mark Hertling described the standoff over humanitarian corridors out of Mariupol as an example of the Russians’ psychological operations – where they raise the hopes of the people who have been trapped in Mariupol and then dash them as part of Putin’s effort to “crush the will “of the Ukrainian people.

“The long lines of people still in the cold out there after having hunkered down in basements is just another disappointment,” Hertling, a national security and military analyst for CNN, said Wednesday on CNN’s “Newsroom.”

“It’s an attempt by the Russian forces to continue to threaten and use tactics which harass the civilian population. Can NATO do anything about this? No. … NATO, the UN, other organizations have already asked for humanitarian corridors. There’s not much else you can do inside a war zone when you can not get forces in there to help people get out. ”

As the US prepares to announce a new military aid package for Ukraine in the face of intensifying fighting in the eastern Donbas region, Psaki framed the latest moves by the Treasury Department “as part of our stepped-up effort to crack down on those attempting to evade our unprecedented sanctions “during Wednesday’s news briefing.

In the new round of sanctions, the US targeted Transkapitalbank, which Psaki described as a “key commercial bank” that has offered services to other banks globally to help them evade international sanctions, as well as what US officials described as “a global network of more than 40 individuals and entities led by US-designated Russian oligarch Konstantin Malofeyev. ” In its release, the Treasury Department said it was also going after companies in Russia’s virtual currency mining industry.

“The United States is committed to ensuring that no asset, no matter how complex, becomes a mechanism for the Putin regime to offset the impact of sanctions,” the department said.

Yellen joined other Western officials in a planned walkout at the G20 summit during Russia’s presentation – a message to that country, Psaki said, that it can not continue “business as usual” while carrying out its unprovoked assault on the people of Ukraine.

Though President Joe Biden said last month that Russia should be expelled from the G20, removing it from the group would require the backing of all the members, which is considered unlikely.

The US is prepping another $ 800 million military assistance package for Ukraine, CNN previously reported, a week after the Biden administration announced a separate $ 800 million package.

Psaki did not offer a clear answer when asked whether the US shares the sentiments of Michel, the president of the European Council, as he stood alongside Zelensky on Wednesday and said: “We are with you and will do everything which is possible to support you and to make sure that Ukraine will win the war. “

She said the US has been “pretty clear that we’re going to do everything possible to make sure President Putin and Russia recognize this is a strategic loss, that (Putin) is a pariah on the global stage.”

When pressed on whether the concrete goal of the US in sending military aid to Ukraine is to produce a “battlefield defeat for Russia,” she stopped short of using that phrase.

“We’re doing everything we can to equip the Ukrainian government, Ukrainian leaders, to effectively fight back in this military battle,” she said.