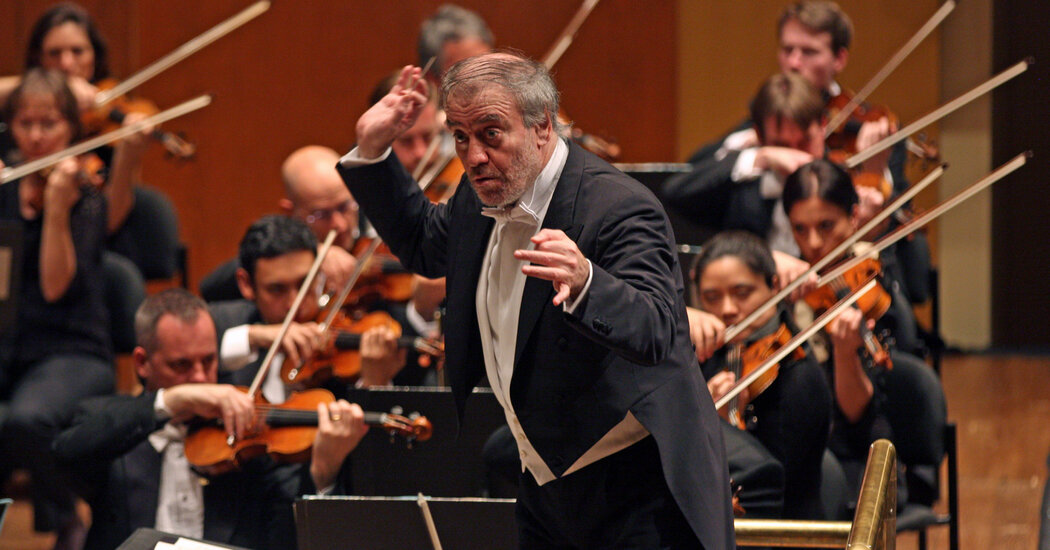 Valery Gergiev, the star Russian maestro and prominent supporter of President Vladimir V. Putin of Russia, was removed Tuesday from his post as chief conductor of the Munich Philharmonic after he refused to denounce Mr. Putin’s invasion of Ukraine.

Dieter Reiter, the mayor of Munich, announced his decision in a news release saying termination of Mr. Gergiev’s contract was the only option available.

Mr. Gergiev’s abrupt dismissal, three years before his contract was set to expire, was the biggest setback yet for the conductor, who has been the target of widespread anger and condemnation in recent days for his long record of support for Mr. Putin and his policies.

The city said that Mr. Gergiev, who had held the post of chief conductor since 2015, had failed to respond to a demand issued on Friday by Mr. Reiter that he condemn Mr. Putin’s “brutal war of aggression” by Monday or be fired.

The news release said that “with immediate effect, there will be no further concerts by the Munich Philharmonic” under Mr. Gergiev’s baton.

Mr. Reiter said in his statement that “I would have expected him to reconsider and revise his very positive assessment of Russia’s leader. He did not. ” Termination was the only option, the statement added.

Mr. Gergiev, one of Russia’s most prominent cultural ambassadors, has faced the loss of a number of concerts and tours around the world since the start of Mr. Putin’s invasion on Thursday, which prompted a long list of performing arts institutions to sever ties with him. But the loss of his leadership position at the helm of a major European orchestra suggested much more serious ramifications for his international career.

It is a stunning turnaround for Mr. Gergiev, whose packed schedule and regular engagements with many of the world’s leading concert halls and opera houses has led the website Bachtrack, which collects statistics on classical music performances, to proclaim him the world’s busiest conductor in several recent seasons.

Mr. Gergiev is a prominent supporter of Mr. Putin, endorsing his re-election and appearing at concerts in Russia and abroad to promote his policies. The two have known each other since the early 1990s, when Mr. Putin was an official in St. Petersburg. Petersburg and Mr. Gergiev was beginning his tenure as the leader of the Mariinsky, then called the Kirov.

Mr. Putin has played an important role in Mr. Gergiev’s success, providing funding to the Mariinsky Theater, where Mr. Gergiev serves as general and artistic director.

His international engagements began drying up last week, when Carnegie Hall and the Vienna Philharmonic dropped him from a series of performances. On Sunday, Mr. Gergiev’s manager announced he was ending his relationship with his client.

The manager, Marcus Felsner, said in a statement that it had become impossible to defend Mr. Gergiev, whom he described as “one of the greatest conductors of all time, a visionary artist loved and admired by many of us, who will not, or cannot, publicly end his long-expressed support for a regime that has come to commit such crimes. ”

On Monday, the fallout continued, with the Verbier Festival in Switzerland saying it had asked for and accepted the resignation of Mr. Gergiev as music director of the festival’s orchestra. (The festival also said it would ban other artists who had shown support for Mr. Putin’s actions, and that it would return donations from individuals under sanctions from Western governments.)

The Edinburgh International Festival in Scotland, where Mr. Gergiev served as honorary president, also said Monday that he had resigned his position after being asked to do so. Philharmonie de Paris, a performing arts complex in France, announced it was canceling two concerts in April with Mr. Gergiev and the Mariinsky Orchestra. And the Lucerne Festival in Switzerland said it was canceling two performances in August with Mr. Gergiev and the Mariinsky.

“In view of Russia’s acts of war in violation of international law, we are sending a clear signal of solidarity to the people of Ukraine,” Michael Haefliger, the festival’s executive and artistic director, said in a statement.

Several other institutions have threatened to cancel Mr. Gergiev’s engagements unless he condemns the attack on Ukraine, including the Rotterdam Philharmonic Orchestra, Teatro alla Scala and the Elbphilharmonie in Hamburg.