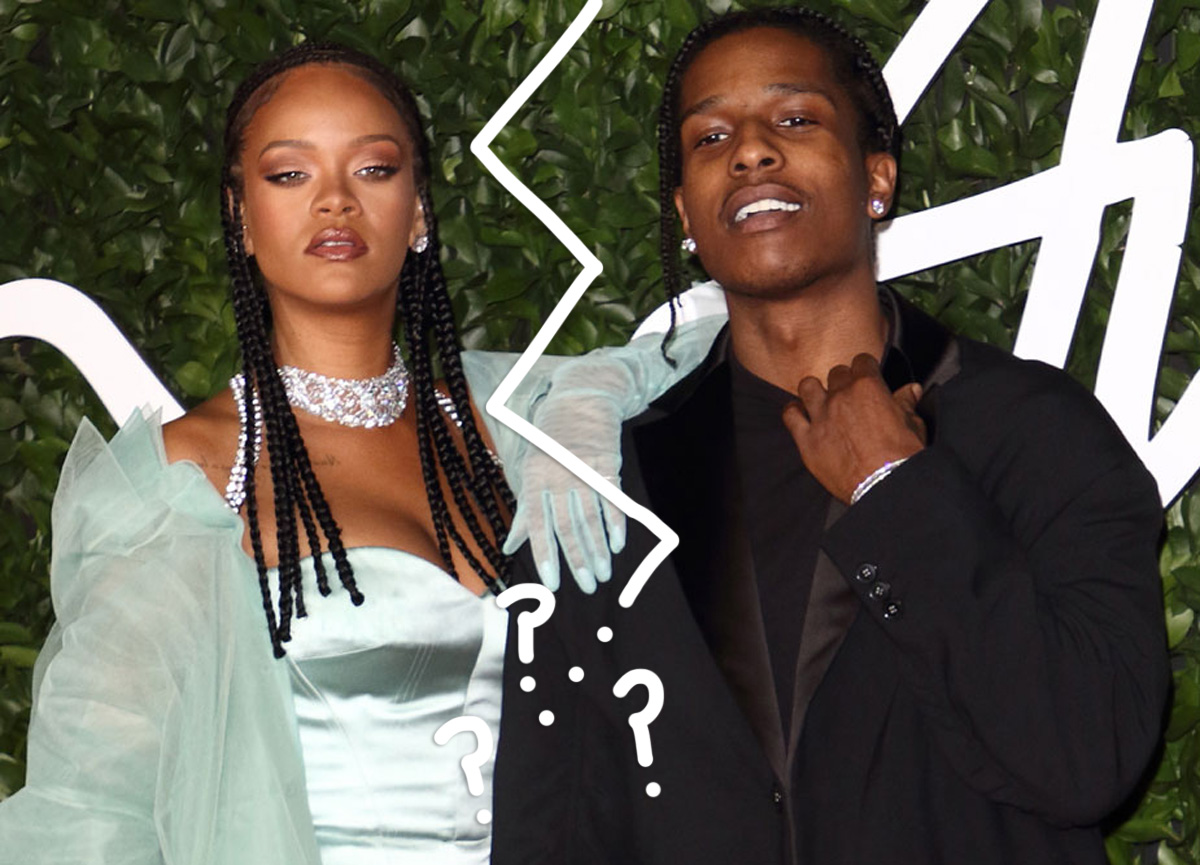 Twitter has been going OFF all Thursday afternoon after rumors rumbled on the social media app that Rihanna spirit A $ AP Rocky supposedly broke up!

Now, there’s been no official confirmation that any of this actually happened. All the conversation around the supposed split is straight-up conjecture. Just so we’re clear! But that has not stopped Twitter users from giving their thoughts on all the purported fall-out here…

Related: Rihanna Gets Real About Her Journey To Love With A $ AP Rocky! So Cute!

The whole thing started after eagle-eyed social media users noticed the Rude Boy singer unfollowed Fenty shoe designer Amina Muaddi on Instagram. As of Thursday afternoon, Rihanna still does NOT follow Muaddi, so whatever else happened (or did not happen), there definitely was an unfollow button smashed somewhere in there. And almost immediately, tensions took to another level when Twitter users started questioning whether A $ AP Rocky could have cheated on RiRi with Muaddi!

Wait… what?!?! Where did that come from ?? Out of thin air ?! (Not exactly, but, sort of. You can see the super-sus tweet allegations that started it all HEREand one of the most viral follow-up claims HERE.) But to be honest, we’re a little (OK, a lot) skeptical of these rumors for several reasons.

For one, Muaddi’s most recent IG pic set – from Wednesday – is literally entirely of the mom-to-be, as you can see (below):

Amina also re-shared another Rihanna image earlier on Thursday morning! Like, hours ago!

Also, Rihanna’s new Vogue cover shoot just graced the world with its presence, too, and in the feature piece the pregnant pop superstar opens up about her relationship with the rapper. At one point, she says to the mag:

“I just feel like I can do any part of my life by his side.”

That’s such an amazing quote! And yet they supposedly went from that sweetness to these alleged cheating rumors practically overnight?!?!

For what it’s worth, Rihanna still follows A $ AP Rocky on IG (and him, her) as of Thursday evening. So it’s not like she took action there! At least, not yet! But skepticism is not enough on Twitter any more, it would seem. The rumor mill is running overtime, and people have TAKES on this supposed situation.

Here are just a few of the many, many tweets being added to the conversation right now, both in the affirmative and ones questioning these breakup allegations:

“A $ AP rocky cheated on rihanna? I do not stand a chance for a decent relationship. ”

“Rihanna getting cheated on shows you that no one is safe, not matter how pretty, successful & amazing a woman can be… nothing is ever enough for men smh!”

“Forget the fact that she is Rihanna, cheating on a woman pregnant with your kid is insane lowkey”

“Cheating on rihanna is insane”

“The gall of it [allegedly] being with Amina too, the amount rih has done for her brand is wild ”

There is at least one good take on the situation, we suppose (below):

twitter people trying to find out what happened: pic.twitter.com/EmAyPPqHQW

OK, fine, there are at least two good tweets about this viral allegations:

“Hi Rihanna, it’s a rocky situation… but you can come back to me ASAP” pic.twitter.com/LmHXX2hYGT

What do you think, Perezcious readers ??

Are U taking these cheating and breakup rumors seriously, or not ?!