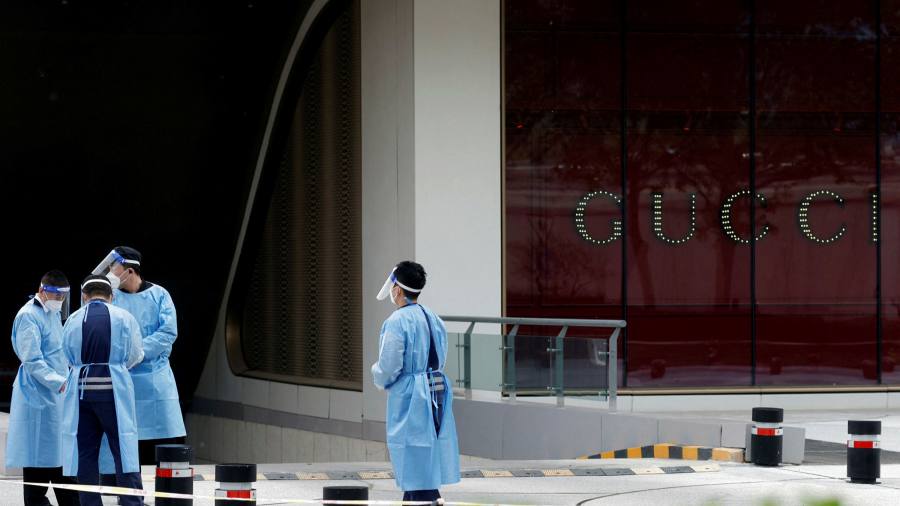 Covid-19 lockdowns across China are shaking western multinationals’ production lines, snarling supply chains and threatening financial forecasts as Beijing steps up its effort to contain a surge in coronavirus cases.

Apple, Coca-Cola, General Electric and Pernod Ricard were among the companies to warn this week of the threat from spreading lockdowns in the world’s second-largest economy, with many more blaming the strict measures for higher costs, shortfalls in their latest results and more cautious outlooks.

An extension of the policies designed to curb the spread of coronavirus has gathered pace in recent weeks, leaving about 345mn people living under full or partial lockdowns across 46 cities, according to estimates from Japanese bank Nomura.

The lockdown of Shanghai, China’s business hub and home to the world’s largest port, has deepened the disruption, ensnaring industries from carmakers to consumer goods and tech groups.

Although the Covid outbreak began in early March and has started to ease in those areas hit first, results in recent days from US and European multinationals are among the first evidence of the global fallout.

Conglomerate GE was among those to flag the dangers, saying that both its output and demand for its aviation and healthcare products in China had been hit.

“How [the consequences of the lockdowns] play out is not something that we have a handle on. I do not think anybody really does, ”chief executive Larry Culp told analysts.

Companies from online retailer Amazon to agricultural trader Archer Daniels Midland noted that obtaining goods from China by ship or air freight now costs more and takes longer because of restrictions at some leading ports and disruptions to internal train and trucking logistics.

Wait times for vessels arriving in Shanghai to dock in port have shot up from 12 hours to two days since the start of the city’s lockdown, freight data provider Freightos said, pushing many shippers to divert exports to the port of Ningbo, where congestion has also worsened.

The damage inflicted by China’s lockdowns comes as the world economy contends with the consequences of Russia’s invasion of Ukraine, which has sent energy prices soaring and prompted the IMF this month to cut its global growth forecasts.

Multinationals are contending not only with strains on supply chains but a slowdown in demand within China. James Quincey, Coca-Cola’s chief executive, said his business in China had started the year strongly, but that the lockdowns, particularly in Shanghai, “took the steam out of things and we ended the quarter negative”.

Spirits group Pernod Ricard, which is home to brands including Jameson whiskey and Havana Club rum and makes 10 percent of its sales in China, cautioned that it had been “very impacted” by the Covid restrictions.

Luxury groups from LVMH, which owns brands such as Louis Vuitton and Tiffany & Co, to Kering, owner of Gucci, have said footfall has suffered in recent weeks. According to Jefferies analysts, Shanghai accounts for about 9 percent of global luxury spending a year, since many tourists visit China’s prime shopping city to buy high-end watches and fashion.

With no sign of a quick end to the lockdowns, some companies said they are finding ways to mitigate the disruption. Carmaker Ford has tried to limit the fallout by focusing on expediting freight from the Shanghai region, where it has roughly 50 Tier 1 suppliers.

Tim Cook, Apple’s chief executive, said that by working with local officials the iPhone maker had managed to restart its final assembly factories in the Shanghai corridor. Falling cases gave “some reason for optimism”, he said.

Multinationals can also draw on two years of experience when tackling coronavirus-related challenges. “We feel better prepared and more resilient for the Covid journey of 2022 in China than we did in 2020,” said Quincey at Coca-Cola.