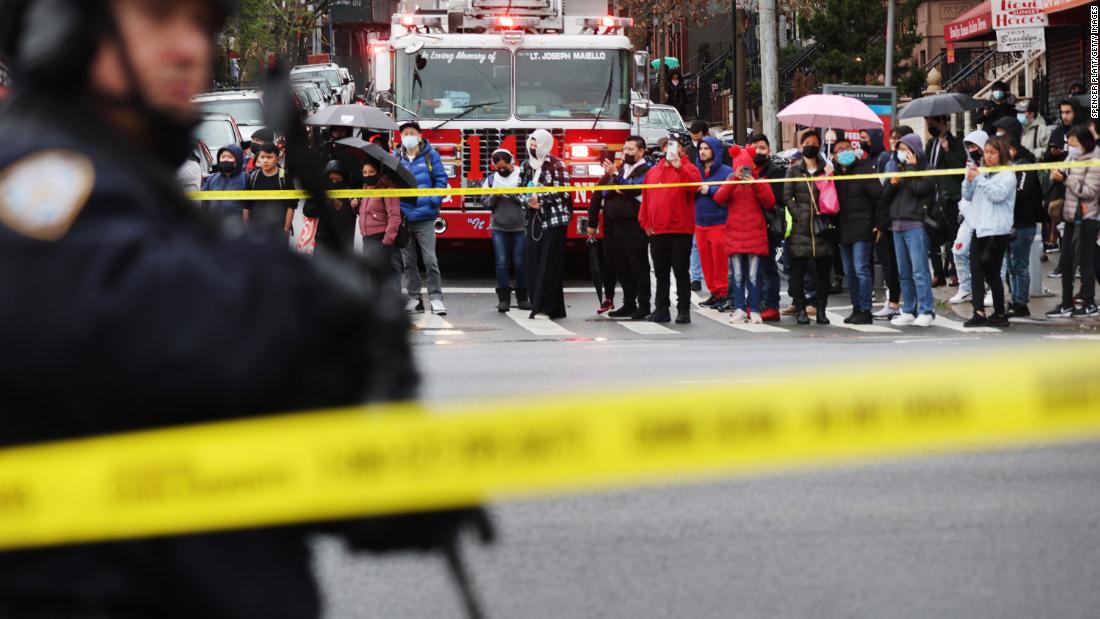 A motive in the attack remains unknown, but two law enforcement sources told CNN James called in the tip to Crimestoppers that led to his capture Wednesday.

“This case was quickly solved using technology, video canvassing, and then getting that information out to the public,” New York Police Department Chief of Detectives James Essig said.

Ten people were shot and 19 more were injured by smoke inhalation, falling down or had panic attacks, officials said.

Here’s what we know about the attack.

Just before 8:30 am Tuesday, the Fire Department of New York got a report of smoke at the 36th Street subway station in Brooklyn’s Sunset Park neighborhood, according to the department. When first responders arrived, they found gunshot victims throughout the subway station and others who were injured in the chaos.

Commuters told investigators that before the train arrived at the station, a gunman in one of the cars opened two smoke grenades, brandished a 9 mm handgun and fired multiple times, police said. At least 33 shots were fired, and 10 people were shot – seven men and three women – Essig said.

Two officials believe the gun jammed during the shooting, they said.

The attack is not being investigated as an act of terrorism, but authorities have not ruled anything out, she said.

Five of the victims were students commuting to school, New York Gov. Kathy Hochul told reporters outside Maimonides Medical Center. She met with a 12-year-old, a 13-year-old, a 16-year-old and two 18-year-olds at the hospital, which is the only pediatric trauma hospital in the area, she said.

Investigators descended on the Brooklyn neighborhood and quickly zeroed in on a credit card and keys to a U-Haul van that had been rented in Philadelphia and were found at the scene.

Both items helped investigators find a U-Haul van Tuesday afternoon near the station in the Gravesend section of Brooklyn, police said.

The 9 mm Glock recovered at the crime scene was purchased by James in 2011 in Ohio, Essig said. It was found with scratch marks on its serial number, according to court documents. Prosecutors said they believe the marks “appear to reflect that an attempt was made to deface the serial number.”

The van was recovered and cleared by the NYPD’s bomb squad, police said. It was due to be taken to a forensic location where federal and local authorities can go through it in a controlled environment, a senior law enforcement official told CNN.

The van was rented by James in Philadelphia, police said.

James was named as a suspect Wednesday, a day after the NYPD publicly described him as a “person of interest.” He has addresses in Wisconsin and Philadelphia, Essig said Tuesday.

James and his family did not immediately respond to CNN’s request for comment. CNN has also reached out to his federal defender, Mia Eisner-Grynberg, for comment.

“He is known to us, and has ties in Wisconsin, Ohio, Pennsylvania, New Jersey, and New York City,” Essig said.

This station is three blocks from where the U-Haul van – which was rented by James in Philadelphia – was discovered, Essig added.

The records show James rented the van using a Wisconsin license with a Milwaukee address.

Based on photographic evidence, police believe that after the shooting, James boarded an R train, went one stop up, and exited at 25th Street, Essig said.

“Following the tragic event in New York City, our Trust and Safety team identified and terminated a YouTube channel associated with the suspect, in accordance with our creator responsibility guidelines,” YouTube spokesperson Jack Malon said in a statement.

YouTube videos have been linked to James because a screenshot from one of them is being used on a NYPD Crimestoppers flyer. James talked about violence and mass shootings in the videos, including one uploaded Monday in which he said he thought about killing people who have presumably hurt him.

James has nine prior arrests in New York between 1992 to 1998, including possession of burglary tools, criminal sex act and theft of service, Essig said. Criminal tampering was also seen on his New York arrest record.

In New Jersey, James was previously arrested in 1991, 1992 and 2007 for trespass, larceny and disorderly conduct, Essig said.

Images captured by people at the scene and witness accounts piece together a picture of the panic and chaos that ensued when shots began to ring out in the smoke-filled train car.

In one video, people can be seen rushing off the subway train after it pulled into the 36th Street subway station.

Smoke pours out of the car where the shooting took place, and people can be heard screaming, that video shows. Someone helps an injured and bleeding person off the train, and another man is seen hobbling off the train shortly afterwards.

Images taken by others at the scene show the subway platform streaked with blood and people sitting and lying on the train platform following the attack.

Hourari Benkada, 27, believes he was sitting next to the shooting suspect on the N train, he said. The man, he said, had a duffel bag and was wearing a Metropolitan Transportation Authority vest. Then the man let off a “smoke bomb,” and Benkada and other passengers tried to rush to the other end of the car, he said.

Benkada was focused on helping a pregnant woman, whom he feared would get hurt as people rushed to the front of the car, when he got shot in the back of his knee, he said, describing it as “the worst pain of my entire life” . “

The shooting started about 20 seconds after the train took off, Benkada said.

“I feel shocked, I feel shaky, I do not know if I can ever ride a train,” Benkada, a lifelong New Yorker and a housekeeping manager at The New Yorker hotel, said after coming out of surgery.

The bullet hit him in the back of his knee and came out the other side, he said. Doctors told him the bullet grazed his kneecap. He is expected to walk on his own after several weeks on crutches.

Benkada heard other people in pain but could not see them or the suspect because of the smoke, he said.

Claire Tunkel, 46, took off her jacket and tied it around the leg of a man who suffered a gunshot wound, she told CNN. Tunkel, who went to the hospital for smoke inhalation, said several victims were lying on the floor of the subway platform after the train arrived at the station.

“One of the guys who was shot, his leg was bleeding pretty bad, so I took off my jacket and tied it around his leg,” she said.

Tunkel was in the subway car where the shooting took place and described the scene as chaotic. While she could not see anything because of the smoke, she said she heard people crying out for help and others who said they were bleeding.

“You could not see anything, but you could feel it,” she said. People were rushing to the front of the car, and some fell to the ground, she noted. “You could feel the bodies.”