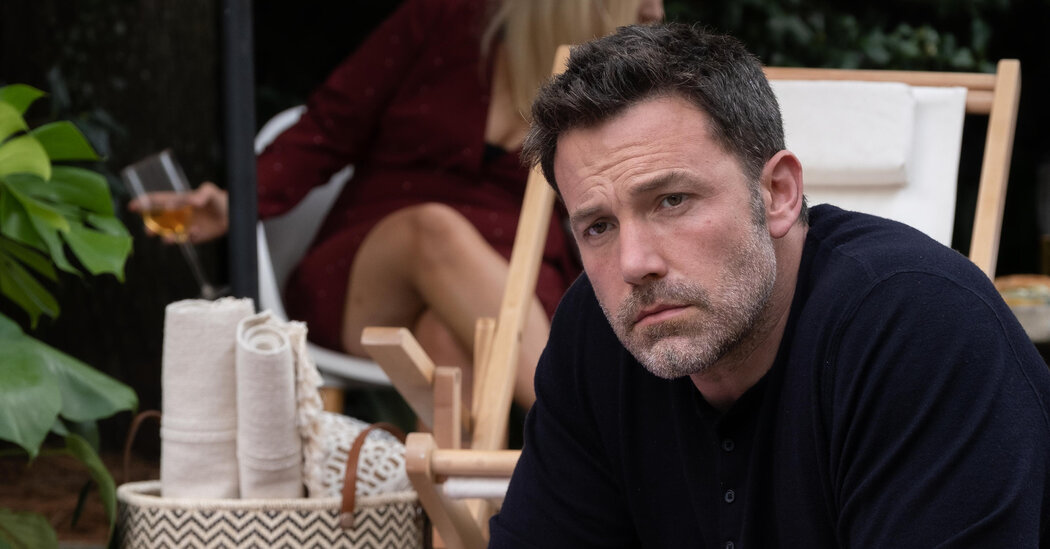 “Deep Water,” alas, proved neither erotic nor thrilling. (It’s difficult to explain how stupid the plot is without spoiling it, so, fair warning.) Ben Affleck plays Vic, a guy who got rich making “the chip” for killer drones, and now occupies himself with several brooding hobbies, including tending to a snail colony and editing a poetry magazine. Ana de Armas is his wife, Melinda, whose life’s work appears to consist of cuckolding Vic with pretty young men, an activity she barely attempts to conceal from a tortured (and perhaps mildly aroused) Vic. The couple shares a precocious child, Trixie (Grace Jenkins). It is not clear why these people are together, or why Vic feels his only recourse is to murder several of Melinda’s suitors in aquatic settings. Most of the onscreen sex is between the married couple, who have less chemistry than Trixie’s science projects. The snails are sadly underutilized. The water isn’t even that deep!

Adrian Lyne hadn’t made a movie in 20 years, and now he has returned with nothing to say. His erotic scenarios – gallerist embarks on affair with sadomasochistic banks (“9 ½ Weeks,” 1986); family man’s one-night-stand spirals into terror (“Fatal Attraction,” 1987); billionaire pays man $ 1 million to have sex with his wife (“Indecent Proposal,” 1993); and housewife cheats with chiseled Frenchman (“Unfaithful,” 2002) – made for movies that were not necessarily good but were always kind of great. The sex scenes were never gratuitous, because the entire films were about sex – usually, they were about how disastrous meaningless sex can be. As one character puts it in “Unfaithful”: “An affair is nothing like a pottery class.”

Part of the thrill of rewatching Lyne’s old movies is that sexual politics are the most perverse thing about them. Though the films delight in their explicit sex scenes, they are fundamentally conservative in their values. And though they often feature seemingly disturbed women, the movies are really about men – white men. Every twist sinks the plots into deeper levels of their masculine anxieties. In Lyne’s masterwork, “Fatal Attraction,” Michael Douglas plays Dan, an attorney who enjoys a comfortable family life – he has the wife, the kid, the dog, the country house – until he spends a night alone in the city and ends up in bed with Alex, a single book editor played by Glenn Close.

Though Alex first appears to be an independent, feminist-minded woman looking for a bit of discreet fun, she is soon revealed as a goblin desperate to trap a man and have his baby. After the affair, she slits her wrist, sabotages Dan’s car, kidnaps his daughter, boils her bunny and finally arrives at the house with a butcher knife, giving Dan and his wife an excuse to kill her and her unborn baby. This was a horror story that spawned its own discourse: People talked about Alex as if she had jumped off the screen to stalk the dads of America. Douglas and Close landed on the covers of “Time” and “People,” which used the film to fuel a trend piece on “real-life fatal attractions.” During the press tour, Lyne bashed Hollywood’s “unfeminine” women and praised his “terrific wife” as “the least ambitious person I’ve ever met”; Douglas said he was “really tired of feminists, sick of them.”

If Alex represented a rising feminist threat, Dan was the modern man who risked being seduced by her sexuality and degraded by her politics. The movie is infused with anxiety about toughened career women and softening American men. Dan’s mistake was not his infidelity but his treatment of Alex after their tryst – he walked his dog with her, took her phone calls, consoled her when she tried to kill herself. The final lesson of “Fatal Attraction” was not do not cheat on your wife. It was, when you cheat on your wife, do not be decent to the other woman.

“Fatal Attraction” was such a reactionary document that it became a centerpiece of “Backlash,” Susan Faludi’s account of the ’80s political and cultural assault on feminism. But now the assumptions that fueled the film have undergone such a reversal that Paramount + is rebooting “Fatal Attraction” as a television series which, as the announcement for the show noted, “reimagines the classic psychosexual thriller” under “the lens of modern attitudes toward strong women, personality disorders and coercive control. ” Alex has risen, and Dan has been permanently subdued. Pop culture is tired of these guys, really sick of them. It is women like Alex who remain interesting.

In this antiseptic environment, Ben Affleck arrives as a naughty little gift. If Douglas represented the imperiled family man of the 1980s, Affleck is the shell of that man. He has tripped into the celebrity persona of a divorced dad who is always getting caught by paparazzi in sad tableaux – here he is staring vacantly into the sea with a towel suspended around his belly, there he is stumbling out the front door and immediately upending a tray full of Dunkin ‘. After being brought low, Affleck’s persona has been infused with a humanizing appeal, as the sad Ben Affleck figure conveys a universal anxiety spiked with a strangely appealing emasculation.

This is the dynamic that worked so well for Affleck in “Gone Girl,” the 2014 film in which a femme fatale is animated (this time around) by a righteous, if deranged, feminist outrage. Amy (Rosamund Pike) stages her own death to frame her cheating husband, Nick, played by Affleck as a sweaty dirtbag who, in a twist, did not actually kill his wife. “Deep Water” tries to reverse the trick, casting Affleck as a seemingly decent guy who is an unexpected murderer, but this misreads Affleck’s appeal – his sleazy exterior belies a fundamental harmlessness, not the other way around.

The “Deep Water” press tour suggests a film that hopes not to trigger any discourse at all. The only player who seems game to talk is Lyne, who himself represents something of a dated figure: the controlling male director who seeks to rule over the movie set with his own sexual energy. Lyne’s bizarre directorial antics have been well-documented, often by Lyne himself: In “Indecent Proposal,” he shouted vulgar encouragements at Demi Moore and Woody Harrelson as they had simulated sex; on “9 Weeks,” he boasted about terrorizing Kim Basinger in an attempt to trigger a real psychological breakdown, a strategy he said was necessary because Basinger “does not read books; she does not actually act. ”

Now the culture is coming for men like him, too. “It’s a little bit more uptight now,” Lyne has complained of post- # MeToo production codes. He bristled when the studio installed an intimacy coordinator on the set of “Deep Water”: “It implies a lack of trust, which I loathed.”

Lyne does not seem to understand what time he is living in, and it shows. “Deep Water” is unmoored: It is based on a 1957 novel by Patricia Highsmith (which helps explain why Vic and Melinda are named Vic and Melinda) but stuffed with glossy ’80s sex scenes and sprinkled with nods to contemporary drone warfare. I was not looking for much – just a campy playground where Ben Affleck could show off his meta masculinity and his enormous back tattoo. But this time, the sex really was meaningless.