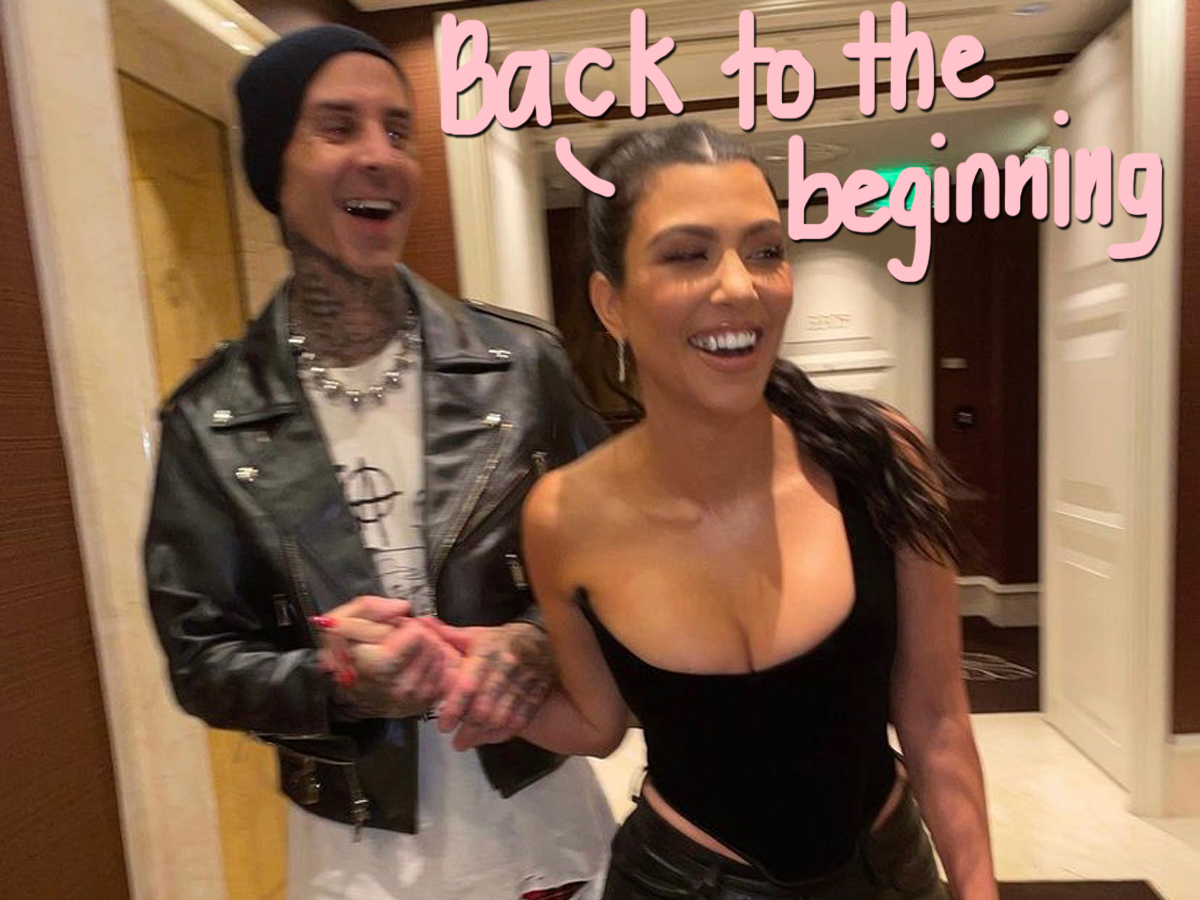 After months of anticipation, The Kardashians Hulu series is nearly upon us. We’re all eager to get a behind-the-scenes look at some of the major things we’ve seen gone down publicly in that time: Khloé Kardashian‘s drama with Tristan Thompson, Kim Kardashian‘s messy divorce with Kanye West, Kylie Jenner‘s second pregnancy…

And of course, Kourtney Kardashian‘s budding relationship with Travis Barker!

Related: Kourtney & Kris Are Fighting Over Including Her Vegas Wedding On The Show?

In the premiere episode, Kourt reportedly explains her relationship with the drummer and how their romance came to be. In a confessional, she shares:

“Travis is my boyfriend. Our homes are a block away from each other. He was one of my closest friends for probably eight years. We used to work out together all of the time. Just us doing stuff on a friend level, we could just be ourselves. We fell in love, and now he’s my boyfriend. ”

The Poosh founder later says she “was definitely always attracted to Travis,” but it took the coronavirus lockdown to get out of the friend zone. She dishes that she was the one who crossed the line first:

“Last year during the pandemic, we were texting and I just put it out there with, like, flirtatious conversation.”

But that was not the only time she had to go first!

“Finally, once I made it known, he asked me to watch a movie and the whole movie he did not make a move.”

Considering the Blink-182 alum can not keep his hands off her now, it’s almost hard to imagine him being so shy! So who finally made the leap, then? The reality star answers:

“Me! I did. He was taking a long time. The movie was over, and then we started another movie and I was like, ‘I do not have time for this movie marathon,’ so I made the first move. ”

LOLz! We love a girl who goes after what she wants!

Elsewhere, her family weighs in on the couple, with Kim reflecting:

“For years we have been telling Kourtney that her and Travis should hook up. Kourtney has just been in this amazing relationship. It’s the first time I’ve seen her happy. I’m so happy for this win for her, because she deserves it. ”

“They are so happy, seem so in love and never stop making out, by the way, ever.”

But the 42-year-old does not have time for anybody’s judgment. In a separate confessional, she remarks:

“Hold on a minute. Let’s just not hate on a girl who finally knows what she deserves. ”

Related: Kourtney Did NOT Accept Scott’s Apology For That Younes Bendjima Text!

In fact, she says:

“I’m actually grateful that my kids can see a loving, affectionate relationship because they have not seen that their whole lives.”

Damn. Rough one, Scott Disick. But Kravis’ blended family is a big part of their relationship. Kourtney gushes during the premiere:

“Watching him with my daughter and how amazing he is with her. The way he speaks to her is so special. Travis and I talk about a future all the time. The second we fell in love, I think we knew how different it was from anything either of us have had before. So I think we absolutely see a future together. ”

Awww! It really seems like their relationship was meant to be. We can not wait to see more Kravis as the show continues!