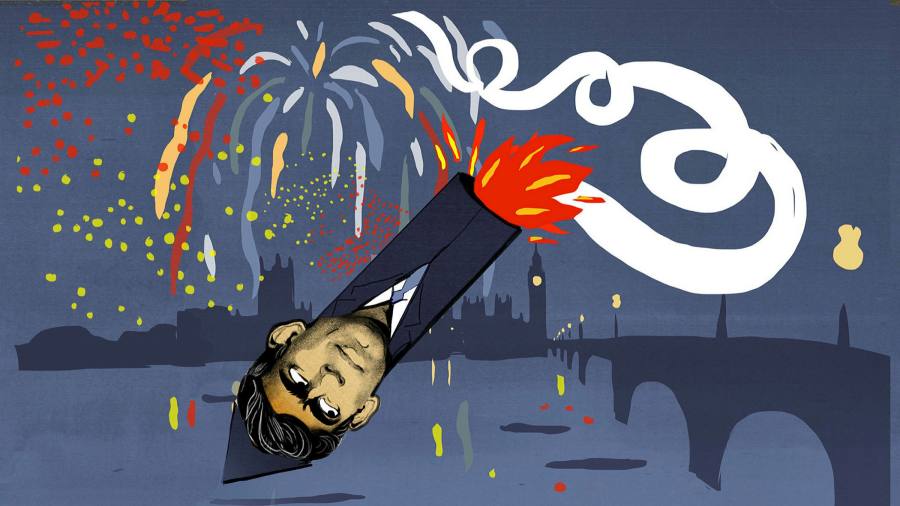 Six months ago opposition leaders were so worried that Rishi Sunak would be their rival at the next election they began working to dent his reputation. The young chancellor’s star quality and popularity ratings reassured Conservatives that they had a powerful Plan B in place should Boris Johnson’s premiership blow up.

Since then Sunak has endured a painful collapse in his public reputation. For Johnson this has been perfectly timed, depriving plotters of his most obvious successor – though in reality the main factor keeping the prime minister in place is that his MPs do not yet fear the Labor threat despite its polling leads.

Yet while Johnson’s allies may welcome Sunak’s fall from grace, it is a serious strategic blow to the Conservatives. Not only have they lost their Plan B, but also their best hope for renewal of the party’s brand after 12 years in power.

It was, of course, easy to be approved of when doling out billions in furlough schemes during the pandemic. But Sunak also benefited from being the “UnBoris”, a personable, competent and emollient alternative when voters tired of the chaos and confrontation of the Johnson years. No need for you to look at the opposition, dear voter, we’ve got our latest model right here.

Such levels of popularity were never going to survive the retrenchment to follow. But Sunak has also been the architect of his own descent. His fiscal hawkishness, which combined tax rises with an apparent lack of empathy for those hit hardest by inflation, alienated both his own side and voters. Political missteps – from his awkward silence when the partygate crisis first broke to his wife’s non-domicile tax status – raised questions about whether Sunak had the political smarts for the top job. There is no penalty in politics for being rich, but there is a price for seeming out of touch.

The fine for his lockdown breach highlights the extent to which Johnson’s contempt for the rules has tainted all around him. Sunak may bounce back, wounded but wiser, but the damage has been done. The luster is gone, his ratings have plummeted and he now looks like just another Tory with a social media operation.

This might be just the familiar tale of a man who rose too far, too fast. There will always be other leadership candidates but the fact that the inexperienced Sunak was so clearly the heir apparent was also a statement about the alternatives. Now MPs are looking past front-runners like him or the foreign secretary Liz Truss. Nadhim Zahawi, the affable education secretary, is much mentioned. But he is even less tested than the chancellor.

What is lost is more than a Plan B, however. Sunak also offered the one viable hope for projecting Tory renewal this side of an election. Continual reinvention has been key to Tory’s success in keeping power and it was always going to be hard to repeat. Brexit and Johnson’s outsize personality delivered the change narrative for the Tories in 2019.

Alone among the leading contenders, Sunak offered that chance. Other leading lights of cabinet – Truss, Michael Gove, Sajid Javid – have been in office for a decade. But Sunak, young, modern, cosmopolitan, unstuffy and, of course, from an ethnic minority, offered at least the hope of a next act. He was until recently the only senior Tory with genuine national appeal – until last summer he even had positive ratings in Scotland. Though his support for Brexit, fiscal orthodoxy and supply side economic principles placed him firmly on the right of the party, he also held out the prospect of reconnecting to some of the lost social liberalism and pro-business agenda of the Cameron era, a way to reconcile the pre- and post-Brexit wings.

Renewal will be key because, worn down by the pandemic and having met its core mission of delivering Brexit, this looks like a government running out of steam as it heads into hard economic times. Two years from an election and with a majority of 80, the Johnson administration brings to mind Disraeli’s quip about Gladstone’s government looking like “a range of exhausted volcanoes”. Much is not working. There is no money and few new ideas.

The new team in Downing Street has been narrowing focus to shore up Johnson but, to borrow a phrase, they have scraped so many barnacles from the boat there is little left of the vessel. The fire that remains is directed at creating dividing lines with Labor and appeasing the right – as instanced by the new Rwanda policy for migrants. Campaigning has been prioritized over governing. Housebuilding goals were watered down to placate Nimby voters. The leveling-up strategy has been denied cash and true devolution. Social care reform is delayed. The energy security strategy postpones most of the difficult decisions. Six years on, ministers still search for “Brexit opportunities”. There is no strategy for growth and not much of a plan for inflation.

Ukraine aside, Johnson is not so much governing as presiding – and relying on a discernible lack of enthusiasm for a Starmer government. But economic hardship looms for many, the partygate scandal has done real damage and Tories are now running out of options for reinvention.

Sunak’s own ideological inflexibility and political shortcomings suggest he would ultimately fall short of the challenge. But of the current options, he was the best hope for a next chapter. The economic picture is darkening. Plan B is dead; Plan A is now little more than to stagger to the line.

People wear face masks outside a supermarket on the Upper West Side in New York City.Noam Galai | Getty ImagesGovernment data shows that inflation has broken another 40-year plus record.And even Treasury Secretary Janet Yellen predicted higher prices could be...

A home is offered for sale by owner on January 20, 2022 in Chicago, Illinois.Scott Olson | Getty ImagesMortgage rates are sinking as markets contend with the ramifications of Russia's attack on Ukraine, and that means home prices are likely...

Norway's government said that based on the announced strike numbers, it had been feared that more than half of the country's daily gas exports would have been lost by the weekend.Joe Klamar | Afp | Getty ImagesEuropean gas prices on...