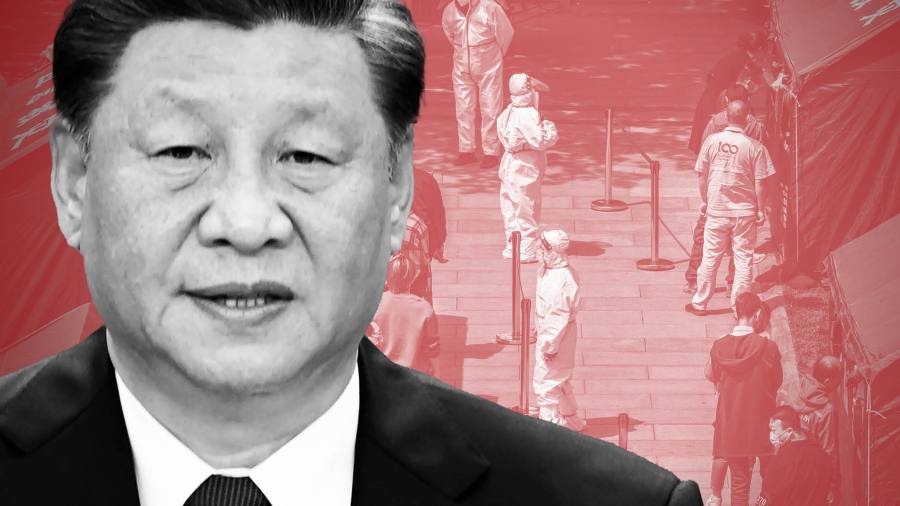 In recent weeks some Chinese government officials and policy advisers worried about the economic impact of the country’s endless Covid lockdowns have begun, in private, to cite the cautionary example of fourth century BC doctor Bian Que.

According to legend, Bian Que warned a local ruler he had contracted a disease requiring immediate treatment. But the ruler insisted his health was fine even as the disease seeped into his bone marrow, sealing his fate.

President Xi Jinping, the officials and policy advisers warn, may be similarly ignorant about the possible consequences of his “zero-covid” policy, which has forced Shanghai’s 26mn residents into a draconian, five-week-and-counting lockdown that many people now fear may be repeated in Beijing.

The stakes are high for Xi, who aims to take an unprecedented third term as head of the Chinese Communist party, state and military later this year. His carefully cultivated image as a strong and competent leader could be badly tarnished if the government loses control of Covid – or blunders into an economic crisis while trying to contain it.

Weijian Shan, a veteran China investor, said in a recent recorded video meeting that the country was embroiled in a “man-made” crisis. “Large parts of Chinese economy including Shanghai have been semi paralyzed and the impact on the economy is going to be very profound,” Shan said. “[China’s leaders] think they know better than the market and many of [their] actions have done real damage to the market and to the economy. ”

One government policy adviser, who asked not to be identified, said that making Xi understand his previously successful zero-Covid policy might not withstand the highly contagious Omicron variant without devastating economic costs was now a “key challenge for the system”.

“People are telling Xi the lockdowns are a concern but I do not think they’re saying how big a concern it really is,” the adviser said. “He’s just so proud of China’s accomplishments fighting Covid that I do not think he worries about the economy.

“I do not think Omicron is going to be contained but this is what the big leader said, so people are making decisions based on this assumption,” he said, adding that the situation in China was now worse than when Covid first spread in early 2020.

At key moments during the Shanghai lockdown, Xi has appeared at best tone-deaf, at worst ignorant of conditions in China’s most important financial and industrial hub.

On April 8, as it became obvious that Shanghai’s lockdown would be extended long beyond its originally planned 10 days and residents struggled to secure adequate supplies of food, Xi met with the country’s winter Olympians. The president, state media reported, “prompted cheerful laughter and applause” when he referred to comments by Eileen Gu, the US-born skiing star who now represents China, about how much she “loves to eat Chinese pies”.

Three weeks later, in a televised address to China’s premier international affairs forum in southern Hainan province, Xi did not mention the intensifying Covid outbreaks, focusing instead on how “the fundamentals of the Chinese economy – its strong resilience, enormous potential and long-term sustainability – remain unchanged ”.

One Chinese planning official told the Financial Times that some senior leaders, skeptical of data compiled by the National Bureau of Statistics, were increasingly turning to their own personal networks to quiz bosses at state-owned enterprises and private-sector companies about the true state of the economy. He added that Deputy Prime Minister Han Zheng, whose portfolio includes the sprawling and struggling real estate sector, now keeps a close eye on new homes registration data compiled by the local housing bureaus.

However, Han disagrees with Xi’s top financial advisers, led by Deputy Prime Minister Liu He, over how to respond to China’s economic challenges. Liu, who is worried about the potential impact on the financial system, has tried repeatedly to reassure investors that Xi’s administration will act to boost the economy.

But the assurances have not led to detailed follow-up measures, and leaders’ room to change monetary policy is limited by concerns about inflation and capital flight as US interest rates rise above China’s.

Xi, speaking at an economic conference on Tuesday, pledged accelerated investment across a range of critical infrastructure sectors – but did not provide a timeframe or overall amount for the effort.

Joerg Wuttke, head of the European Chamber of Commerce in China, argues Liu’s reputation as the government’s most competent economic official – and its strongest advocate of market-oriented reforms – has been “impaired”. “Investors followed [Liu] almost blindly for years [but] he no longer manages to implement important things in his own system, ”Wuttke said.

“The Chinese government is trying to use limited and targeted monetary and fiscal measures to support growth while keeping inflation, financial risk and currency depreciation contained,” Prasad said. “This would be a tough juggling act in the best of circumstances, but is even more so when the economy is already creaking.”

As Xi’s zero-Covid crusade rolls on, the suffering in Shanghai intensifies. One local resident, a middle-class professional who asked not to be identified, said she kept a packed suitcase ready in case she was summoned to a centralized quarantine facility.

“This reminds me of Dmitri Shostakovich,” she said, referring to one of the Soviet Union’s most famous composers. “Every evening he waited for the KGB, listening carefully for footsteps and elevator [noises]. I guess that is why his Jazz Orchestra No 2 [suite] lingers in my head these days. ”

Shanghai’s predicament has given her new appreciation for the democratic systems of government so despised by Xi. Democracy cannot guarantee the best governance, but it can prevent the worst from happening. That is enough. ”